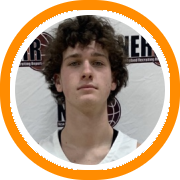 Wilbraham & Monson had a very good season last year with head coach Mike Mannix at the helm. They went 24-3, earning an elite eight spot in the National Prep Championship. The Titans also were the top seed in the NEPSAC Class AA Tournament. While they did lose a lot of talent, including the top ranked NERR 2022 prospect, there are still a number of returners to go with some intriguing newcomers.

1. Their floor general from last year is back

Jeremiah Dorsey is now in his senior season. His experience at the point guard spot should pay dividends for this squad. The crafty playmaker can hit open three-pointers and generate steals at a solid rate defensively. Dorsey does a nice job being an extension of Coach Mannix on the floor. When adversity hits, having someone like him will make dealing with those times much easier.

2. Pair of committed seniors will play an important role

Charlie Fantom & Jon Medley recently made college commitments to Skidmore and Tufts respectively. They also bring back more experience to the team. Fantom is a wing with an impressive long-range shot and the ability to find open teammates when attacking closeouts. Medley is a guard who can hit open spot-up three-pointers, finish crafty layups using either hand, and has quickness/IQ to impact a game defensively.

2024 wing Korbin Dixon impressed at a number of events this offseason. He will look to carry this momentum into his junior year with more being expected of him. Dixon possesses athleticism to excel in an uptempo game and breakdown ability one one to create in the half-court. He also moves his feet well laterally as an on ball defender.

3 Questions Heading Into the Season

1. Will they not put pressure on themselves to replace the decorated class of 2022?

The 2022 Wilbraham & Monson class was a special one. It featured Duke commit Kyle Filipowski and twin brother Matt now at Harvard. In addition to those two, Deven Austin is now at Princeton, Sean Seymour at Saint Rose, and Nikias Schoenerstedt at Nyack. It will be important for the current team to not worry about filling their shoes and rather paving their own path as a group.

2. Which of the newcomers will make names for themselves?

Coach Mannix has brought in a group of newcomers who are making their NEPSAC debuts this season. Ryan Duncan is a 2023 guard with smooth shooting touch and scoring ability at multiple levels. Jameson Smith is another 2023 guard who will bring IQ, floor spacing, and vision to find others. Tate Laczkowski is a 2023 big man with size, long-range shooting, and instincts moving without the ball. 2024 big man Evan Reeves and 2025 forward Ethan Clark are two others to keep an eye on.

3. Can Percy turn his potential into consistent production?

2023 forward Simon Percy’s ability at 6’6 to initiate fast breaks, hit cutting teammates, and be a three-point threat has caught our attention for some time now. The issue is, that skill-set has not always led to reliable contributions on the floor. If Percy can take a leap and be counted on night in and night out, that would be a significant boost to the Titan’s accomplishing their goals this year.