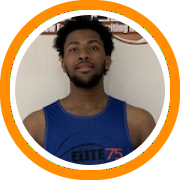 Nick DeFeo spent the last two years on the coaching staff at Woodstock Academy, where the school was doing some unprecedented within their athletic department, adding a prep program to a high school that competed within the CIAC state association.

When Notre Dame High School of West Haven was looking to create a similar blueprint, he was the logical choice to be the prep team’s head coach.

Unlike Woodstock though, Notre Dame didn’t have on-campus housing and was limiting their prep program exclusively to post-graduate students who had already graduated, meaning that DeFeo’s recruiting efforts would be limited to finding kids from the local area who were interested in a post-graduate year and willing to live at home for another year to do it.

Now, almost four months into the school year and two months into their season, there can be no denying that DeFeo and his team have exceeded all expectations in year one.

The roster consists of 12 different players who all competed in the local CIAC ranks last year and are now able to test and prove themselves against top prep program from New England and beyond.

They head into the holiday break with an overall record of 9-4 including wins over the likes of Redemption Christian and Winchendon with their losses coming to national caliber programs like Woodstock and Link Year Prep.

A pair of Hamden High School alums arrive with built-in chemistry and continuity. Fabian Cox is a wide-bodied big man with long arms, a soft touch that extends to the arc, and a steady dose of suitors at the scholarship level. He’s making nice strides with his conditioning and is one of the Green Knight’s primary interior weapons this season. Justin Radford provides a nice compliment with a long and wiry 6-foot-7 forward who can cover the court and has good long-term potential to continue to develop.

Kerwin Prince is a physically imposing 6-foot-6 forward with a powerful build and chiseled physique. He can bully most defenders when attacking downhill and has the open floor athleticism to match. He’s off to a terrific start to his post-graduate season too, leading the team in scoring on four different occasions. Jordan Williams provides similar size in more of a conventional big man.

Trumbull High School grad Timmond Williams is probably the most potent scorer on the roster. He puts points on the board in high volume and scores it in bunches from all three levels once he gets going. He can make deep jumpers, attack close-outs, and find different ways to score in route to the rim.

Jay Turner may be the most versatile guard on the roster. He’s a big, power guard with good positional size, long arms, and a wealth of intangibles including clear leadership tools. He’s naturally unselfish, capable of playing multiple positions, and equally engaged on the defensive end of the floor.

Notre Dame has also gotten good production out of a pair of New Haven natives. Amistad alum AJ Edwards is a quick and compact guard with a tight handle and lot of playmaking ability who recently went for 21 points in the win over Winchendon. Kyle Daniels, a Wilbur Cross alum, has deceptive length and good shot-making ability.

John Lukau missed some time with a shoulder injury this fall but put up big numbers at Naugatuck last year and provides another athletic scorer on the wing. Jaren Smith, DJ Ransom, and Gaeley Etienne all add to the perimeter depth and project as future college players.

It was almost a year ago that plans for Notre Dame’s new prep program were announced and at the time they were met with plenty of skepticism. How would it co-exist with their high school program? How would they be able to recruit to a day school? How would they compete with top prep programs? 13 games into their season and those questions have already been answered. DeFeo not only filled his roster, but he did so with 12 players who all have the talent to play at the next level. They’re buying in to the team concept and winning games because of it and it hasn’t had any barring on Notre Dame’s high school program. If anything, they’re ahead of schedule and proving the model they envisioned can work and is bound to continue to grow.