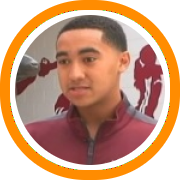 While there might not be as many big names in this proud program as we've seen in recent years, don’t expect that to impact the effort put forth by head coach Andrew Vitale and his players this year.

“The goal is always to make the AA tournament,” Vitale said. “This is a solid, coachable group and we’ll continue to get better as the year goes on.”

Senat, the younger brother of former Marianapolis star and current Wagner player Greg Senat, has added another inch or two to his frame and is looking more and more like his big brother every day as his physique continues to fill out.

Bernstein, the hard-nosed southpaw by way of New York, has visited several division II campuses including Assumption, Concordia, and St. Thomas Aquinas, and will have every opportunity to prove himself a scholarship caliber player during his senior season.

He’ll be joined in the backcourt by a pair of local post-graduates in Tom Horvat and Adrian LaFleur, creating a formidable three-guard line-up.

Horvat is a crafty guard who Vitale calls “the surprise of the group.” He’s coming off an incredible career at Providence Country Day, in which he scored over 2,000 career points. Lafluer, the son of Providence associate head coach Andre Lafluer, is a southpaw shot-maker with a good understanding of the game.

Another newcomer, and a big key for Marianapolis this season, will be six-foot-seven junior Abraham Richter. A transfer from Cardozo High School in New York, Richter is still learning how to play but can make shots and has a quality motor.

That five man core will be supplemented by the likes of: Sebastian Ntansah, an undersized but quick junior guard who transferred from Bishop Hendricken and will make his biggest contributions on the defensive end; freshman guard Tyler Burton, who has a chance to compete for minutes; and senior point guard Artur Lachick who brings a veteran’s stability to the backcourt.

All in all, this certainly isn’t the most talented Marianapolis team we’ve seen in recent years, but they have enough pieces to surprise some people, and given the tenacity with which Vitale’s teams are always known for playing with, they’ll surely maximize their potential.