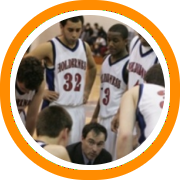 The 2008-2009 season was supposed to be a two horse race in Class C…but Holderness had other plans.

Head coach Tony Mure’s club scored a dramatic upset victory over Lawrence Academy in the opening round of the NEPSAC tournament and would advance all the way to the final before falling to St. Mark’s.

This year, Holderness won’t sneak up on anyone as they are now a well known commodity, returning key contributors from last season’s squad and adding a couple of important new pieces.

Imoh Silas and Alex Francis give Holderness arguably the most explosive interior duo in Class C.  Silas is coming off a tremendous summer with the Expressions Elite squad and should enter his junior season with a newfound confidence.  He’s a physical specimen – mobile, strong, and athletic – and capable of controlling a game at both ends of the floor.

Francis is as explosive of an athlete as we have in New England and he had a good summer of his own running with the New England Playaz.  The New York native is a highlight reel waiting to happen and capable of making incredible plays at just about anytime.

Newly arrived Scott King provides the perfect compliment along front line with good size, an impressive skill set, and a knockdown three-point jumper.  If he plays up to his potential, his addition could prove to be especially significant.

Another newcomer, Zach Hurynowicz, also figures to be of tremendous importance.  The Burlington High School transfer is exactly what coaches look for in their point guards, tough and smart.  He will establish himself as a leader for this team from day one and be the steady hand of poise throughout the season.

Emmanuel Smith gives Coach Mure a second ball-handler capable of playing either guard position and creating his own offense if need be.  Gabbas Maldunas is another returning junior, who blossomed towards the end of last season and figures to be of importance this year.

Put it all together and it is easy to see that last season was no fluke.  Not only is this team definitely for real, but with a year of experience and a couple of important newcomers, they are also a potentially better team than the group who advanced all the way to the Class C final last season.