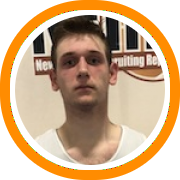 New Hampshire is a state where the talent is typically dominated by the local prep ranks and this year is no different as Brewster Academy, Tilton School, New Hampton School, Kimball Union Academy, Holderness School, and Proctor Academy continue to drive the vast majority of college coaches into the state.

That isn't the only theme of the 2018 rankings inside the Granite State though. No matter how you slice it, this is a group that is going to cause some debate.

There are four players who can make a legitimate claim on the number one ranking, and three of them come from the Brewster frontline.

West Virginia bound big man Derek Culver is the most physically gifted of the bunch. He's explosive, powerful, and yet still mobile. He has the most physical upside left to discover and so it wouldn't be unreasonable to believe he'll end up having the brightest future, especially in a Mountaineer system that should be perfect for him.

Miles Norris is a California native heading back west to attend Oregon next year. He's not quite as long as he looks, but he's actually proven to be more skilled than he previously got credit for. With nearly 14 points and 7 rebounds per game through the end of January, if you were basing your argument on productivity, he could be the winner.

Then there's Isaiah Mucius who has been highly ranked for years now, in large part because of the belief in his long-term potential. His productivity has been farther behind historically but that's started to change this year as the Wake Forest pledge has both expanded his skill set, become a much more consistent shooting threat, and proven himself a true big wing in the process.

The final candidate is Tilton's Marcus Zegarowski, who has the longest history of production against the best competition. The Creighton commit led an overachieving Expressions team to a spot in the EYBL finals this summer and is doing similar things this year at Tilton, pacing the Rams to a 20-3 start while putting up nearly 22 points, 5 rebounds, and 5 assists per game through January.

Syracuse bound wing Buddy Boeheim rounds out the top five given his incredibly efficient EYBL season, consistent development this year at Brewster, and the belief that he'll have a solid career playing under his father at Syracuse with his skill set and high basketball I.Q.

The next major question is how you weigh extremely productive perimeter players like Nick Timberlake, Eze Dike, Philmon Gebrewhit, and Shandon Brown against big men who had their choice of high-major suitors like Keenan Fitzmorris, Lukas Kisunas, and Nate Roberts. The question in and of itself illustrates why ranking prospects is a very inexact science and certainly subjective.

No one in that group has been as good as Timberlake this year, and it's not particularly close. Has opportunity played a part in that? Of course. But would KUA trade him for any of the three aforementioned big men? Probably not. Conversely, would Stanford trade a commitment for Fitzmorris for that of Timberlake? The answer to that is no as well. So how do you reconcile that? It depends entirely on your philosophy on rankings and ultimately illustrates why they should never be taken too seriously.

At NERR, our goal is to give our readers an accurate portrayal of how college coaches weigh talent. Right or wrong, size and potential are always at a premium. Fitzmorris, Kisunas, and Roberts are going to end up at a "higher level" than Timberlake, Dike, Gebrewhit, and Brown, even if they all restarted their recruitment today. Who will be more productive in college, relative to the "level" they end up at, that might end up being the exact opposite, so again, it all comes down to exactly what you are assessing when you rank prospects.

Another theme of this New Hampshire class is the amout of still available impact talent for the D1 level as Timberlake and Gebrewhit are joined by Max Zegarowski and Christian Hinckson among others from Tilton, Walter Ellis and BJ Shaw from Brewster, Ian Krishnan from Proctor, Mason Webb from New Hampton, and Toni Rocak from Phillips Exeter along with the NHIAA's own Tayler Mattos from Kearsarge.