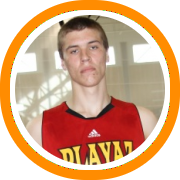 Providence belonged to the Playaz this weekend as the u17 squad ran through the field to take the tournament championship while the u16 squad made an unexpected run to the finals.

The Playaz opened with two lopsided pool play wins in the senior division, only to come out and pound the B.C. Eagles in Saturday night’s opening round of bracket play.  Connecticut Select gave them their first true test in Sunday morning’s quarterfinals, cutting a double digit first half lead to five midway through the second before the Playaz were able to pull away down the stretch.

The semi-finals saw a match-up against the PA Playaz of Pennsylvania who managed to keep it relatively close for most of the first half before ultimately getting blown out.  The finals were short on drama as well as the Playaz kept a talented New Heights team at bay throughout the second half before securing a 15 point victory for the championship.

Kaleb Tarczewski was nothing short of dominant this weekend for the Playaz.  The team got an early scare on Saturday when the big fella had his legs cut out from under him when dunking a ball, landing hard on his back and staying down for a few minutes.  Despite clearly feeling the effects of the fall for the rest of the weekend, Tarczewski was unstoppable in close range, scoring virtually every time his team was able to get him the ball and showing a full assault of powerful finishes, jump hooks, and advanced maneuvers to establish position.

While Tarczewski led the way throughout the weekend it was John Papale who turned in heroics in the championship game, scoring 34 of his team’s 66 points and making four big three-pointers after halftime.

Joe Bramanti continued to provide steady play in the backcourt, making good decisions with the ball while also scoring in the open floor while Terry Brutus put together an incredible highlight reel of explosive finishes.  Evan Cummins also contributed up front showing a nice jump hook of his own at one point along with some of his trademark passes.

While the Playaz were able to turn away New Heights in the u17 final the result was the opposite in the u16 final, were they fell just short of their counterparts from New York.  Despite the loss it was a terrific run for the local squad as they knocked off a loaded Albany City Rocks team in the 2nd round, a talented Westchester Hawks group in the quarters, and Team Takeover Delaware in the semis.

New York native Dwayne Foreman Jr. played the starring role for the Playaz while John Powell had flashes of brilliance along the frontline and the perimeter trio of Cane Broome, Ramon Gibbons, Jaylen Blakely, and Devin Thomas more than held their own.

Other News & Notes from Providence

•  The Mass Rivals knocked off the Jersey ShoreShots in the opening round of bracket play and had a chance to beat Philly’s Finest in the quarters but the potential game winner hit off the front of the rim.  Akosa Maduegbunam was the standout in that game hitting a variety of tough shots.

•  Clyde Smith was the standout for New Heights this weekend, serving as the team’s leading scorer and putting points on the board in bunches to lead the team to the finals.

•  Aim High from Connecticut ran all the way to the finals of the u17 platinum bracket before running into Jaren Sina and Hoop Heaven Elite.

•  Colin Richey was at his best in a crossover game on Saturday night, running the show and getting his fingerprints all over the outcome of the game.

•  Aaron Calixte put on a show for the Cyclones on Saturday night, dropping 30+ points on the Westchester Hawks.

•  Salisbury big man Samuel Dingba has officially started to generate a buzz.  Playing for the Westchester Hawks this weekend Dingba was like a man among boys in the u16 bracket.