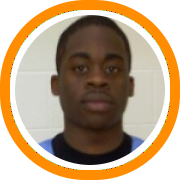 When Jason Perrier arrived at Stonehill College last week for Hoop Mountain’s Super Week I Camp he was hoping to prove himself to the division II coaches in attendance.

Well it couldn’t have gone much better as Perrier had picked up his first scholarship offer, from Assumption College, by the time camp ended.

“[Assistant] Coach [Alfonso] Payne saw me earlier in the month,” Perrier said.  “He came back to see me for a couple days at Hoop Mountain and brought [Head] Coach [Serge] DeBari with him.”

The Assumption coaching staff was clearly impressed by what they saw as they quickly offered the Christian Heritage rising senior a scholarship.

“After they watched me play they said they wanted to offer as soon as possible because they have a senior who is graduating and I would be able to fit that role.”

Perrier is a powerful guard who boasts a college ready body, a sound skill set, and a much improved perimeter jumper.

“I showed them I could play against good competition last week,” Perrier said.  “I’m a slasher, but I also played some point, controlled the fast break, and played 1-3.”

With his first scholarship offer in tow Perrier will return to Hoop Mountain on Sunday for Super Week II, hoping to continue to attract more college coaches.

Perrier will then play in the New England Elite 75 Showcase on July 9th and then run with his Connecticut AAU squad for the rest of the month as they travel to New Jersey, West Virginia, and Florida.