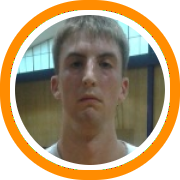 Carleton is a university of 22,000 students located in the Canadian capital of Ottawa, Ontario.  The Ravens have one of the strongest basketball traditions in all of Canada under head coach Dave Smart.  Over the course of the last 15 years the team has won over 92% of their games for an incredible 368-31 regular season record.  Their post-season success has been equally impressive, winning 9 of the last 11 OUA championships.  Coach Smart also serves as an assistant on the Canadian National Team.

Pate is a Canadian native who first moved to the United States to play at Long Island Lutheran High School in New York before transferring to the New Hampton School, where he has starred on both the hardwood and the gridiron in each of the last two years.

Unfortunately, Pate suffered a major ankle injury just prior to the start of his senior season.  Incredibly, he was able to play through the pain for several weeks but ultimately opted to have season ending surgery.
Pate’s absence down the stretch of the season made him a potential steal late this spring and ultimately Carleton was able to take advantage of that.

The quick six-foot-three lefty arrived at New Hampton with the reputation for being a shooter who could also make plays on both ends of the floor.  He made great strides during his junior season, learning to slow down and make better decisions with the ball and dramatically improving his understanding of the game.

He went on to star for CIA Bounce on last year’s spring EYBL circuit and then ran with the New England Playaz throughout the summer.  Here are some of his highlights from last July’s evaluation period, care of 2eZ Mixtapes: