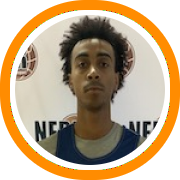 The 6’4” Windsor High School senior is one who is able to interpret his contexts and rise to the occasion. Last year, he exploded for 56 points in a CIAC game while at South Windsor. When his squad faced East Catholic, a top-two team in the state with several future Division One players, Ellison told his teammates he would deliver. He followed through, scoring 38 points and dropping several assists against Jaylin Hunter, now at Old Dominion, and Matt Knowling, a Yale commit.  Time and time again, he stuck out and asserted himself for a struggling team in need of production.

A few weeks ago, while participating in New England Recruiting Report’s Open Gym Series in Connecticut, he sensed another opportunity, and he pounced. Ellison was one of the event’s top performers. He used his supreme athleticism to stand out from the pack. Now, as he aspires to reach the next level, he will leverage that performance towards building his budding basketball career.

“Not really being as known as some of the other guys that were there, and knowing this could be a big deal for me, going harder than I have before and trying to make a statement was my plan being there.” Ellison said.

Make a statement he did.

“I, admittedly, hadn’t heard of him before, and I think it’s safe to say the same is the case for most scholarship level college coaches, but he really seized the opportunity to prove himself in that setting and made a major impression,” said ESPN analyst and NERR founder Adam Finkelstein.

“Ellison is another one of those guys that is the prototype we had in mind when we started these events. He put up huge numbers at a small CIAC school last year but had yet to really make a name for himself beyond that.”

Yet Ellison’s name might have gave him innate sensibilities as to when to perform his best. After all, few can claim such a strong bloodline. His father, Shawn, was Connecticut’s High School Gatorade Player of the Year in 1989-90 at Farmington High School and earned a scholarship to UConn. His grandfather, Bobby Knight, was a Hartford native who played at Weaver High School, starred in the ABL in the late 1940’s and early 50’s, then had a two-game stint with the New York Knicks. After that, he played for the Harlem Globetrotters.

Knight taught Ellison’s father, who is passing it down to his son. Father and son were in similar situations, being at suburban, nontraditional basketball hotspots.

“Him (Shawn) letting me know different things he did in college and things my grandfather did made me want to be in that same place,” Ellison said.

Shawn taught him to work hard, and Justice believes he has since he was at a young age. Like his grandfather, he would love to play professional basketball at some level.

Ellison will have significant opportunity to stand out. In transferring from South Windsor to Windsor, he is now part of one of the state’s most successful programs. Coach Ken Smith, who has coached in the state for over thirty years and has four state championships, will be cultivating Justice in the next stage of his development. Windsor has produced numerous collegiate players and Connecticut stars.  Corey McKeithan, who is committed Rider for next season, and Primo Spears, who averaged 27.5 points-per-game last season and played for the New York Lightning in the EYBL, are among his fellow seniors. Practicing with and against them will forge a better player through the fire.

Windsor also should benefit from adding someone of Ellison’s ability and experience. He is first and foremost a scorer.

“I get to the rim. I believe I use changing speeds and my strength very well,” Ellison said. “When that isn’t working, I believe my mid-range shot is good and adds to my game.”

“He’s a big, physical guard who really excelled getting downhill with the ball in his hands,” said Finkelstein. “He played through contact and had the type of size and body type that should allow him to play and defend multiple positions.”

“He’s very, very explosive,” said Smith, “He’s fine-tuning it. It goes up and down, but he understands.” Both Ellison and Smith claim that Justice is a terrific passer and assist-maker; one just might not know it because of the heavy scoring burden he has embraced in the past.

He is still a raw but rich source of talent. To round out his offensive skill set, he is working to improve his three-point shot. It is a trait integral to the Windsor offense.

Smith wants to see him grow away from the ball. Ellison is used to being the leading man, but his offensive movement and conceptual understanding will amplify his abilities. So far, Smith has been pleased with Ellison’s development as a leader. It’s a new atmosphere for Ellison at Windsor, but he is off to a great start in his coach’s eyes.

Ellison knows it’s the other area of play where he needs to step up. He made defense a point of emphasis in his Fall League play with Windsor. He and his dad have been getting in the weight room to bolster his lower body strength and agility in order to compete. He wants to be that multi-dimensional stopper that others see in him.

“I think defensively, it’s going to step up in a big way,” Ellison said.

In addition, Smith says he will need to execute what he considers winning plays like setting quality screens or going after loose balls.

Ellison is a young senior for 2020. He says he should be a junior age-wise, but doesn’t regret honing his chops against older players. He is proud to be not only a four-year varsity player but a productive one as well. He is mulling prep school options as an equalizer of sorts and a way to build up his profile and academics even further.

Ellison intends on playing college basketball (he wants to study business) but also enjoys drawing, listening to music, and excelling in school. He was even a manager for the South Windsor Field Hockey team.

“Being a manager, a big thing I learned is that detail is everything. It can make a big difference in wins and losses,” Ellison said of his time away from the glamorous role he is to which he is accustomed on the basketball court.

That experience might serve him well on a deep and talented Windsor group. Ellison may not put out the same gaudy production as he did at his previous stops, but it is evident he has the capabilities to make an impact at high levels.

“He’s a great kid. He’s going to be a great leader one day,” Smith said. “He can beat you so many ways. Once he gets to another level, in college, he’s going be an outstanding player for somebody.”