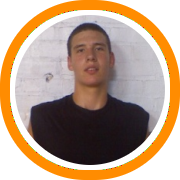 Playing at E.O. Smith High School for the last four years, Tyler Olander has grown up in the shadows of UConn’s Gampel Pavilion.

E.0. Smith literally lies immediately adjacent to the University of Connecticut campus and so naturally Olander always dreamed of playing for the hometown Huskies.

“UConn is my favorite,” Olander plainly told the New England Recruiting Report this fall when we visited him and the rest of his teammates at Worcester Academy.

Olander spent the first half of his year at the NEPSAC school before transferring back to E.O. Smith to finish his high school career, leading his team to a 17-3 regular season record.

There was some question as to whether Olander would return to prep school and join the class of 2011 following his graduation from high school this June, but when the opportunity to head straight to UConn presented itself, Olander didn’t hesitate to pull the trigger.

The six-foot-nine forward began to emerge as a player of prominence on the national scene this summer when he shined at the Reebok All-American Camp as well as on the rest of the grassroots circuit with his Expressions Elite team.

An always skilled player Olander gives defenders fits with his southpaw skills.  He has become much more physically strong and aggressive within the last year which has helped him to expand his game and become a major mismatch problem, capable of attacking the defense inside and out.

He will offer UConn some versatility along their frontline next year as he gives them a face-up four man who is capable of stretching the defense all the way to the three-point line, something they have traditionally lacked as they have gone with a double low post line-up.

In addition to the Huskies, Olander saw recruitment from a plethora of high major schools this season including places like Florida, Wake Forest, Marquette, Providence, and Penn State.