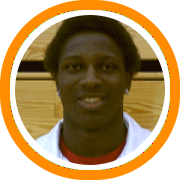 Michael Beasley once again sits at the top of the list in the class of ’07. The 6’8 forward who is currently attending Notre Dame Prep en route to Kansas State next year has battled various nagging injuries since arriving in Fitchburg but it is hard to argue that there is a better prospect in the region than this versatile forward.

Moving up 4 spots to #2 is 6’0 point guard Malcolm Grant from Winchendon who is committed to Villanova. Grant is a long distance marksman who was very impressive in the National Prep Showcase going for 23 points and 8 rebounds in an impressive victory against Hargrave Military Academy and dropping 26 points and 6 rebounds versus Fork Union Military Academy. Rounding out the top 5 is 6’5 shooting guard Rakim Sanders from St. Andrew’s, 6’10 center Craig Brackins from Brewster Academy, and 6’8 forward Matthew Bryan-Amaning from South Kent. Making the biggest jump is another long distance marksman in 6’6 forward Tim Abromaitis from Farmington High School in Connecticut who was not ranked in the top 50 in our pre-season rankings and is now listed at #12 in the class of 2007.

In the class of 2008 not only has Devin Ebanks retained his top ranking but he has separated himself from the pack after turning in consecutive top-notch performances at the National Prep Showcase and most recently at the Stoneridge Holiday Prep Classic which featured the best of the east vs. the best of the west. Emmanuel Negedu jumps up one spot to lock in the #2 ranking and is followed by Christian Morris and two newcomers to the class of ’07 in Isaiah Thomas who transferred to South Kent from Curtis High School in Seattle and Terrell McKenzie who recently reclassified at Brewster Academy.

In the sophomore class Alex Oriakhi holds his ground as the class’ top player, but recently reclassified Jin Soo Kim from South Kent is giving chase at #2, as is Oriakhi’s Winchendon teammate Jamal Coombs who checks in at #3. 6’8 power forward Erik Murphy from St. Mark’s and 6’5 swing man Givon Crump from Tilton round out the top 5.

Phil Pressey, Nadir Tharpe, and Ron Giplaye still have the top three spots in the class of 2010 locked up but you can add another name to that group in 6’5 Jason Morris from the Hotchkiss school who has exploded onto the seen as Connecticut’s top freshman player.

To see the complete list click the rankings button in the middle of the toolbar and select which area you would like to see. Rankings will be updated again following the conclusion of the high school season.

It is important to remember that these rankings are simply the opinion New England Basketball Services staff and are not intended to be definitive in any way shape or form. While our staff is very experienced and spends a great deal of time in order to ensure that these rankings are as accurate as possible, with so many players to evaluate in New England it is typically impossible to see each player more than a time or two in most cases, making this a very inexact science. Consequently, these rankings are purely for the enjoyment of our readers and by no means a statement of fact.