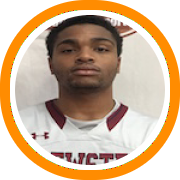 Mika Adams-Woods, New Hampton 2019 - The upstate New York product ran the show for the Albany City Rocks in the EYBL last spring and summer and will now spend the next two years in New Hampton. He arrives with A10 offers lready on the table.

James Bouknight, MacDuffie 2019 - The New York native is no stranger to New England after spending part of his spring with the Playaz u16 squad. He joined the PSA Cardinals in July and has played to rave reviews in early open gyms so far this fall at MacDuffie.

Joel Brown, Brewster 2019 - Known as one of the best young point guards in Canada, Brown has good size and playmaking tools. He hopes to play up to the long line of talented lead guards to come out of the Academy in the last decade.

Hassan Diarra, Putnam Science 2020 - The younger brother of former PSA standout and current UConn forward Mamadou Diarra, Hassan is another PSA Cardinals who brings an attacking mentality and toughness to the court. He picked up a variety of early D1 offers this summer.

Ryan Greer, Northfield Mount Hermon 2019 - An Atlanta native who ran with Atlanta Xpress in the UAA this year, Greer already has high-major attention to his name as he joins a deep and talented team at NMH this season.

Sherif Kenney, Brewster 2019 - Kenney made his New England debut last May and was arguably the best player at the Memorial Day Super 16, plaing his way into the ESPN 60 as a result. Now the power combo-guard is at the Academy looking to further his reputation.

Tre Mitchell, Woodstock 2019 - A highly skilled big man from the Pittsburgh area, Mitchell landed an early offer from Penn State this summer and is bound to see his recruitment grow to new levels now that he's surrounded by high level competition on a daily basis.

Richard Springs, MacDuffie 2020 - A true sophomore from New York, Springs was a standout with Team Rio in the UAA this past season. He's strong, athletic, and potentially versatile with clear high-major attributes.

Anthony Thomas, Putnam Science 2020 - A long, slashing wing from Maryland with a world of upside, Thomas is a product of Team St8ment on the Adidas Gauntlet and was also a standout at the Hoop Group Future All-American Camp this summer.

Symir Torrence, Vermont 2020 - Another Albany City Rocks product, Torrence is a potential big lead guard in the making who made a tour of high-major campuses this summer including stops at Ohio State, Indiana, Cincinnati, and Syracuse among others.