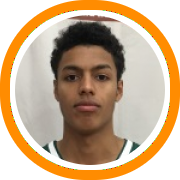 New Hampton School guard Grant Robinson is headed to Amherst College next year to continue his basketball career at one of the best academic colleges in the country.

A six-foot-one guard who came to NHS following a succesful career at Potomac High School in Virginia, Robinson was recruited by schools at all three levels of college basketball but ultimately spurned scholarship offers in favor of joining a program that is the second ranked liberal arts school in the country and finished the recent season as the third ranked division III team in the country.

Robinson is an elite perimeter defender who has transitioned into more of a true point guard during his post-graduate season. He will be undoubtedly capable of making an immediate impact for Amherst next year.

Robinson becomes the 6th member of New Hampton's 2017 class to finalize their recruitment as the Huskies are now sending graduates on to the likes of Northwestern, Arizona State, St. Mary's, Cornell, Dartmouth, and Amherst.