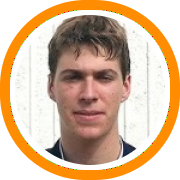 He is expected to sign his National Letter of Intent before this weekend. He held other offers from Dartmouth, LaSalle and Marist. He recently took an unofficial visit to George Washington and visited Penn officially earlier this fall.

Lull is a California native who first came to New England 15 months ago and has made significant strides during his time here. He owns tremendous size at 6-foot-11 and is virtually impossible to move inside the lane. He's showed flashes of stardum, with running sky hooks and nimble finishes off the pick-and-roll, both for New Hampton as well as for the New England Playaz.

There's no denying that Lull is just beginning to scratch the surface of his potential and so he could eventually be a very impactful player for USF head coach Rex Walters.

Lull joins Malik Massey (UNCG) and Will Rayman (Colgate) to become the third New Hampton product to commit to a division I school thus far in the class of 2016. Below are some of his highlights from the grassroots season care of 2eZ Mixtapes: