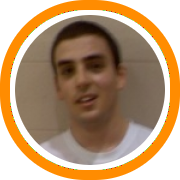 Trinity High School came into Saturday’s Class L championship game not just looking for a title, but also hoping to make a statement.  They were able to do both as they easily defeated Manchester Memorial 50-25.  With the win, Trinity’s post-season dominance continued as they didn’t have a margin of victory under 14 points in the entire tournament.  Junior guard Jordan Laguerre led the way for the victors as he scored a game high 26 points – outscoring the opposition on his own.  Manchester simply had no answer for the explosive guard as he was creating his own offense in a number of ways.  But defense was also a key to this game as Richard Madol (8 points) did a great job of holding Memorial star Jason Chevrefils to only 10 points on 2 of 11 shooting from the floor.  Trinity led 22-11 at the half and never allowed Memorial to score in double figures in any of the four quarters.  While this was the third straight trip to the finals for Trinity, this marked their first state championship since 1985.

Sixth seeded Portsmouth High School took on and defeated all challengers in the Class I state tournament as they knocked off third seeded Oyster River in the quarters 71-61, second seeded Pembroke in the semi’s 58-48, and top seeded Pelham in the finals 61-48.  Senior guard John Mulvey was the star down the stretch of the finals as he finished with 25 points, including 20 in a dominant second half.  Mulvey showed great composure by knocking down 7 of his last 11 shots from the floor, including 3 late three-pointers, despite missing his first 7 shots of the game.  George Tsougranis chipped in with 11 for Portsmouth including two huge buckets in the game’s final minutes.  Pelham star Justin Hojlo was never himself in this one as his normally lethal outside jumper wasn’t falling due to a thumb injury sustained in the semi-finals.  But he was still able to create off the dribble for 10 points along with a number of assists.  Steve Spirou was often the beneficiary of those passes and finished with a team high 14 points.  Pelham finished the season with a record of 20-2 while Portsmouth claimed their first state championship in the last 15 years.

Conant High School defeated Prospect Mountain 43-33 to claim the class M title on Friday night.  This championship was earned with offensive balance and defensive execution as Ryan Hingston and Brendan Hussey led the way with 12 & 11 points respectively.  Conversely, Sean Martin was the only player on Prospect Mountain’s roster able to reach double figures as he also finished with 12.  Conant, who came into the tournament as the second seed, won each tournament game convincingly as their 10 point margin of victory in the finals was the smallest they had seen in the entire post-season.

Moultonborough justified their top seed in the tournament as they held off Newmarket for the Class S state title last Friday at Plymouth State.  The two teams had split their two regular season match-ups and Friday’s first half was more of the same as it was just a one point game going into halftime.  But the third quarter was the difference as Moultonborough won that period 17-5, allowing them to take a lead that they wouldn’t again surrender.  Curtis Williams did all he could for Newmarket, scoring a game high 31 points, including 18 in the first half.  Kevin Eisenberg led Moultonborough with 18 while Pete Lyons and Eric Moriarty both chipped in with 10.  Newmarket finished the year with a record of 17-3 and advanced to their second state final in as many years.  Moultonborough finished the season at 19-1.