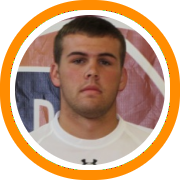 Anyone who followed Class L basketball in NH last season knows that Trinity (Manchester, NH) was on another level. They went 17-1 in the regular season, and won the title, following back to back championship game losses to Salem. The Pioneers would have been the consensus favorite once again in NH’s big-school division, but they lost six of their top eight players, including the state’s 2009 Mr. Basketball Jordan Laguerre. Laguerre reclassified and transferred to the New Hampton School, and starting guard Cormac Fitzpatrick transferred to Manchester Memorial. As a result, there is no clear cut favorite in Class L, and there are six teams with a legit shot at the title. The goal for every team in Class L and Class I in NH is to get to UNH, where the semi-finals and championship are held. Here’s a look at the field, and their chances of getting to Durham:

Merrimack – Last season Manchester Memorial went from a team who won less than six games to the title game, a remarkable turnaround. Merrimack could be this year’s Memorial. Not only do the Tomahawks have everyone back from last year’s team, but they also have the best freshman in the state in Dimitri Floras. Floras is a silky smooth guard who can shoot and drive. He joins his brother, Anthony Floras in the backcourt. The older Floras is one of the state’s best defenders, and is one of four strong senior players for Merrimack, along with Eric Watson, Travis Maser and Matt Hardwick. Watson could be an all-state player this year; he’s strong and can score inside and out. This team showed they were for real by defeating Trinity, Dover and Memorial in one day, and edging Bishop Guertin in another at the Rivier College Fall League.

Trinity – Only Trinity can lose the state’s best player, four starters and two key player off the bench and still be the second best team in the state entering the year. Of course it doesn’t hurt when you replace an outgoing transfer with an incoming one. Senior forward Gordan Duffley joins Coach Dave Keefe’s squad following his transfer from Manchester Central over the summer. He joins senior point guard Phil Hayden in the starting lineup. But the player to watch for this team is David Madol, a junior forward who just might be the best player in the state. Zach Stevens gives Trinity an outside threat, and sophomores Logan Kesty and the 6’9” Silvere Aluko join the crew after playing on a talented Pioneer JV team a year ago.

Bishop Guertin – If the games were played on paper, the Cardinals would easily be the favorites in Class L this year. They have the most talented trio in the state with senior forward Scott St. Lawrence, and junior wings Connor Green and Sean McClung. Green transferred from Bedford High over the summer. These three kids are some of the best college prospects in the NHIAA. Guertin plays a frenetic style, pressing the entire 32 minutes. And they have the depth to go with that style, with nine or 10 quality ballplayers. The key for them will be sharing the ball, not turning it over, and not getting into foul trouble. Other key players will be senior forward Ryan Turner, senior guard Luke Lavash, and junior guard Nick Pyzocha.

Dover – The Green Wave have been a competitive team in recent years, but haven’t been able to take the next step to get to UNH. Don’t be surprised if they take that step this season. Alex Burt was the most improved player in the state last year as a junior, and this season he is perhaps its best player. At 6’0”, he can play either guard spot, can handle the ball well and shoot the lights out. Dover loses its other big scorer off last year’s team in John Boyatsis, but this year they will be a more gritty, better defensive unit. Other key players to watch are a pair of juniors in forward Morgan Faustino and guard Kenaan Al-Darraji. This team proved they could play with anyone by winning the BST Summer League, defeating Memorial, Milford and Bishop Guertin in the process.

Manchester Memorial – After the Crusader’s well documented turnaround last year, they lost their entire starting lineup to graduation; and that was a team that only played six kids most nights. The biggest loss was Jason Chevrefils, a first team All-State forward. But the team adds Fitzpatrick, who transferred to Memorial over the summer. He’ll play his senior season for his father, Mike Fitzpatrick, one of the best coaches in NH. His son, Cormac is one of the state’s better shooters, and is looking to win back to back titles…for two different schools! He joins senior Matt Couture in the backcourt. Couture was a key player off the bench last season, and this year will make the switch to the point guard spot. Other key players will be senior forward Edhem Mahmutovic, junior guard Shomari Morgan and senior guard Vinnie Zenni.

Alvirne – The Broncos were the surprise team of last year’s Class L tournament. They were only the 13 seed in the regular season, but made it all the way to the state semi-finals. They lost inside force Brennan Donnelly off that team, but they return his younger brother, junior guard Caleb Donnelly, an excellent shooter. Also returning are senior forward Ryan Sweeney, senior guard Joe O’Hearn, and junior forward Sean Moyen to give Alvirne as good of a “Big Four” as anyone in NH. Moyen missed the second half of last season with a knee injury, but he’s healthy now. He and Sweeney are both dominant inside players. And O’Hearn does a little bit of everything. The starting point guard is Cody Lambert, a solid senior leader.

Nashua South – South relied almost solely on four players last year in Jake Nelson, Mike Polley, Dan Feehan and Josh Ramos. Nelson is the only one who returns this year, with the other three graduating. But the Purple Panthers and Head Coach Nate Mazzerole reload, with talented players like junior forward Nilsson Basora, senior wing Louis Muccioli, and his brother, sophomore guard Anthony Muccioli. Add to the mix Kaleb Joseph, a guard who is one of the state’s best freshman. Nelson is possibly the best player in NH. He’s a great floor general, leader, passer and defender. But he will start the season on the sidelines with a foot injury. He is expected to miss the first 2-3 weeks of the season, but possibly more. If he can return healthy soon enough, this team will have a shot.

Salem – Under Head Coach E.J. Perry, Salem has been a perennial Class L powerhouse. They won back to back titles, including an undefeated campaign in 2007-2008. Last season they made it to the semi-finals. But over the last two years they were carried by stars Josh Jones and Mike Kimball, who both graduated in the spring. Returning however, is starting point guard Alex LaRosa. LaRosa is a great shooter, and one of NH’s best all-around guards. Junior forward Joe Gallant gives the Blue Devils a good inside presence. Salem’s teams are always very disciplined and well coached, they’ll be in the hunt once again.

Nashua North – The Titans missed the tournament last year, but with the offensive talent this team has they will be scary to play, especially later in the season. Expect to see some high scoring games when North plays this year. Defense and rebounding could be a problem for them, but they have the firepower to put up points in a hurry. Their weapons include Javon Williams, the top sophomore talent in the state, as well as fellow sophomore guard Ryan Gauthier. These two are young, and will make mistakes, but they’re very talented and will get better as the season goes on. Also contributing offense will be seniors Alex Pratt and Trevor Rancourt, and senior big man Kevin Rosenberg provides muscle inside.

Londonderry – Londonderry had a solid team last year, and returns most of its talent. Senior Matt Sanborn and junior Mike Colby are two of NH’s best shooters. Senior C.J. Flanders is also a solid shooter, and senior Jeff Bintz, at 6’6” is a good inside player. The key loss for the Lancers is point guard David Feinstein, as Londonderry doesn’t have anyone to replace him at the one. Also, Head Coach Jim Zorbas is taking the year off from coaching, and Sanborn is suspended for the first six games of the season. Still, once Sanborn returns, this will be a tough team, with a good combination of size and shooting ability.

Other Teams to Watch

Pinkerton – Seniors Zack Mathieu and Ben Proulx are two of the best inside players in the state. They’ll be tough to stop in the paint for any team, and the Astros have a solid new point guard in junior Chad Park.

Winnacunnet – Head Coach Jay McKenna always gets the most out of his team. This year they will live and die by their guard play, and they’ll be led by seniors Ryan Dunn, Jesse Gould and Harry Knowles.

Exeter – The Blue Hawks had the state’s best freshman last year in Mike Thorpe, but unfortunately for Exeter he moved over the summer to CT…then again to Newton, MA. They’ll still be a good team, led by senior guards James Holler and Louie Vigars.

Manchester Central – Tough summer for Coach Doc Wheeler. You graduate four of your five starters, including All-Stater Will Bayliss. Then have two of the players you actually were returning transfer to Trinity. The lone returning starting is big man John Wickey, a 6’6” junior who is in for another big season.

To read more of Jeremy Leveille's input and analysis on New Hampshire high schools spots check out his website at www.nhnotebook.com.