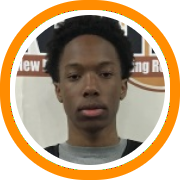 New Hampshire's junior class is in the midst of quite a few changes.

A number of local products have now joined the prep ranks, many of them reclassifying back to 2020 for the coming year. Simultaneously, new players are arriving at the state's various prep schools in waves, literally coming from all around the world to play in the nation's most prestigious prep school league.

So, as we roll out our updated 2019 rankings in the Granite State, we are aware of the fact that this list will undoubtedly look much different in a few months when we add the incoming prep products to the list. Until then though, we will continue to keep the list small, as we are doing with all 2019 rankings, to account for the fact that these players are just now approaching their most important years.

Proctor Academy's Darion Jordan-Thomas returns for his second year in the prep ranks and currently sits as the state's top ranked player and a definite division I prospect. The Massachusetts native still projects as a bit of an undersized big man but he is bouncy and active enough to compensate, not to mention very productive around the rim on both ends of the floor.

Tilton also returns a proven product in wing scorer Eric Beckett, a Canadian native who is likely to see an increased role for the Rams this season. Beckett showed last year that he could get his own shot, and do it at all three different levels. He's a scholarship level talent and with a year of experience under his belt he should now be ready to step-up as a consistent offensive weapon in AA.

Jordan-Thomas will be joined by another Boston product this year at Proctor in Mykel Derring, who is transferring in from Brighton. Derring was one of the breakout performers at this summer's Elite 75 College Showcase as he showed a blend of athleticism and skill that allowed him to both attack the rim and make shots from behind the arc. In Class AA of the NEPSAC, he'll get a chance to prove those talents against top-notch competition and continue to increase his profile.

Spaulding High School's Arie Breakfield is the first name from the NHIAA to show up in the rankings. He's an athletic wing with good size and a solid build. He thrives in transition and is often times the most physically gifted prospect in a high school game, but he's also becoming a more consistent shooting threat from the perimeter.

Also from the local NHIAA ranks is Winnacunnet forward Jack Schaake. At 6-foot-7, he has size that translates to a scholarship level along with solid footwork and athleticism to match. He plays with a toughness and physicality that should makes him a nearly impossible match-up locally but also allows him to compete with higher level competition in the spring and summer.

There were several others who earned consideration and will remain prospects we follow in the coming months. KUA's Will Engelhardt is the prototypical skilled forward at 6-foot-6. Portsmouth's Alex Tavares has contributed to the state's most succesful team over the last two years and is very skilled. Pinkerton Academy guard Andrew Lufkin is a heady two-way player who defends, makes shots, and is very tough. Brewster Academy's Zac Bennett is cut from a similar cloth as a lock-down defender, despite the fact that he missed July with injury.