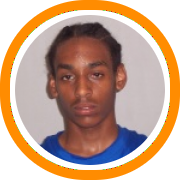 There are a lot of things that go into being a good long range shooter.  The most obvious of which is likely how consistently the ball finds its way through the hoop when you let it fly.  But there are other factors to consider as well.  How deep is your range?  Do you have a favorite spot or can you shoot it from anywhere?  How quick is your release?  Are you just a standstill shooter or can you shoot coming off of screens as well?  Can you shoot off the dribble or just off the pass?

It is only when you put all of these factors together when you realize who the best long range shooters really are.

#15 – RJ Evans, Norwich Free Academy, Team Odom – The Connecticut native spent the majority of his time with Team Odom although he also suited up for the Rhode Island Hawks from time to time.  Regardless of what jersey he is wearing you can never leave him open as he is virtually automatic when given a free look.

#14 – Nikoal Vukadinovic, Marianapolis Prep, Rhode Island Breakers – “Niko” may be streaky but when he gets going he is absolutely lights out.  The Serbian combo guard is returning to Marianapolis for a post-grad season this year where he is sure to generate a good deal of interest from college coaches.

#13 – Lucas Croteau, Spalding HS, New Hampshire Playerz – He started the summer in a big way when he went for 43 points against the New York Gauchos during the Rumble in the Bronx tournament.  It was more of the same from then on out which ultimately resulted in Croteau earning a scholarship from Southern New Hampshire.

#12 – Chris Prescott, Northwest Catholic HS, Connecticut Basketball Club – He started the summer on a hot streak from the perimeter at session II of the Eastern Invitational Basketball Camp and he finished the summer in the same fashion at the New England Elite 75 Showcase.  Somewhere in between he received and accepted a scholarship offer from St. Joe’s.

#11 – Austin Carroll, Worcester Academy, New England Playaz – Having the opportunity to play for his father this summer appeared to do good things for Carroll’s game as he proved what those who have watched him play before already knew…don’t leave him unguarded from anywhere inside half court.

#10 – Jon McAllian, Bangor HS, Maine Hoops – When McAlian knocked down 7 three-pointers in the first half of a game at AAU Nationals it sent loads of college coaches flocking his way.  The 6’5 guard didn’t need long to decide he wanted to keep firing away in his home state as he committed to the University of Maine.

#9 – Shane Gibson, Killingly HS, Connecticut Phenom Elite – What is so impressive about Gibson is not just his accuracy from behind the three-point line, but how that accuracy stays consistent in a variety of different circumstances.  Unlike most players on this list, Gibson is equally effective as a standstill shooter or when coming off of screens.

#8 – Malik Smith (pictured), Notre Dame Prep, BABC – Smith was the most consistent long range threat on BABC’s team this year.  But the powerful guard is much more then just a shooter as he can put the ball in the hole in a variety of ways.  His scoring will be on display at Notre Dame Prep this year as he transfers out of the city.

#7 – Kevin Donahue, Stonington HS, Rhode Island Hawks Red – After a series of terrific performances during the month of July the talented guard earned himself an invitation to the Elite 75 Showcase in August where he was one of the biggest stories of the day.  “The lethal lefty” as the fans were calling him that day, didn’t seem to miss as he fired southpaw three-pointer after three-pointer through the rim.

#6 – Ryan O’Connell, St. John’s Prep, Massachusetts Rivals – If we were listing the shooters with the deepest range he would undoubtedly be number one.  He is literally a threat to make shots as soon as he crosses half court.  Like many other great shooters he is a super confident player that will let if fly with only the slightest bit of daylight.  O’Connell put so many shots in the hoop during his junior season with St. John’s that he led the state of Massachusetts in scoring.

#5 - Candon Rusin, Twin Valley HS, Albany City Rocks – The Vermont native first became known to many local fans at the Boston Shoot-Out when he exploded onto the scene with an extremely impressive display of outside shooting.  He combines his deep range with a quick release and an ability to shoot off the dribble with equally impressive consistency.

#4 – Mike Marra, Northfield Mount Hermon, Rhode Island Hawks – Marra put on a show at the Reebok Summer Classic East when he went for 40 points in his team’s opening game.  Those who were in attendance said he couldn’t miss.  It wasn’t long after that performance that the newly reclassified junior started hearing from high major programs like Providence, Florida, and Ohio State.

#3 – Derek Retos, Brimmer & May, New England Select – When he is hot there isn’t a better shooter anywhere in the region.  And although he maybe small in stature at this point in his career he has got big range on his jumper as he will pull up 5 feet behind the line without thinking twice.

#2 – Tucker Halpern, Nobles & Greenough, New England Select – Not only is he a terrific shooter, but at 6’7” his shot is extremely difficult to block.  The mismatch opportunities that a player of his size and skill creates is just one of the many reasons why his recruiting stock has gone way up since the conclusion of the high school season.

#1 – Ephraim Herskowitz, Beaver Country Day, Boston Bounce – Many fans have probably never heard his name before, but in our opinion he is the region’s number one shooter.  How about this statistic…in the Hall of Fame Spring Classic he knocked down 6 or more three-pointers in all 4 of his team’s games.  He followed that performance up in the Hall of Fame National Invitational where he knocked down 8 three-pointers in his team’s first game and 9 in their second.