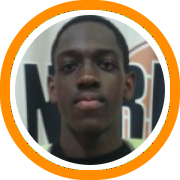 New England is well represented this weekend in New York City for the "Big Strick Classic," an all-star game welcoming top prospects from around the country, played in honor of streetball legend John Strickland

The weekend got underway on Friday with media sessions in the morning followed by a scrimmage at the famous Dyckman Park. Putnam Science big man Mamadou Diarra was the leading scorer in that game with 49 points in a 140-120 game.

Saturday's action will take place at Gauchos Gym beginning with a dunk contest and three-point shootout. The regional game is set to tip at 6pm followed by the national game at 8pm.

Diarra, Hamidou Diallo, Mustapha Heron and Wenyen Gabriel are all part of "NYC Team" which is essentially comprised of top prospects from New England all the way down to the DMV. They face "USA Team" which features top ten national prospects like Josh Jackson and Edrice Adebayo among others.