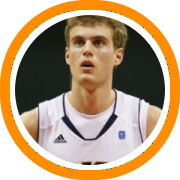 There are plenty of familiar names in the southwest bracket as 9 of the 16 teams feature players from the New England region on their roster:

#1 Kansas – The Jayhawks sixth man was a forward at Brewster Academy when he became one of the nation’s most widely pursued big men.  Now Thomas Robinson is a sparkplug off the bench for head coach Bill Self, averaging 8 points and 7 rebounds and poised to inherit a bigger role next year.  Another NEPSAC alum Brady Morningstar (New Hampton) starts in the backcourt for the Jayhawks and does a little bit of everything with 7 points, 3 assists, 2 rebounds, 1.4 steals, and a 40% average from behind the arc  (Naadir Tharpe committed in 2011)

#16 Boston University – Boston College High School Jake O’Brien alum took America East Rookie of the Year honors as a freshman and third team all-conference honors as a sophomore.  He was playing some of the best basketball of his career when he went down with a season ending injury at the turn of the year.  (James Kennedy and Zach Chionuma committed in 2011)

#5 Vanderbilt – The Commodores have a trio of players who previously starred in New England.  Freshman Rod Odom (Middlesex School) and redshirt junior Andre Walker (Brewster Academy) have led the team in minutes played off the bench this year while senior Joe Duffy (Phillips Exeter) has seen action in 14 games.

#4 Louisville – Rick Pittino has plucked three of his current players out of New England prep schools.  Rhode Island native Mike Marra hasn’t yet shot the ball with the long range consistency he is capable of but is still an integral part of the rotation averaging 20 minutes, 7 points, 2 rebounds, and 2 assists per game.  Terrence Jennings has taken the starting center position in his third year out of Notre Dame Prep and is one of the Big East’s best shot-blockers at just under 2 a game while also averaging 10 points per game.  South Kent’s Russell Smith has provided depth off the bench in his first season. (Angel Nunez committed in 2011)

#13 Morehead State – Romeric Lasme graduated from the Winchendon School before spending two years at Laramie County Community College.  Now the junior is in his first year at Morehead State where he has seen only limited minutes off the bench for head coach Donnie Tyndall.

#6 Georgetown – Anyone who has seen Georgetown play this year knows that Nate Lubick’s value far exceeds the 4 points and 4 rebounds he has averaged this year as his high-motor and basketball I.Q. were big reasons why he was inserted into the starting line-up at mid-year and has since averaged close to 25 minutes per game.

#14 St. Peter’s College – The Peacocks have a trio of Connecticut natives on their team thanks to assistant coach Marlon Guild, who comes from the Nutmeg State himself.  Senior forward Jeron Belin graduated from Maloney High School before heading to Monroe Community College.  Belin averaged 12 points and 5 rebounds per game as the league’s top sixth man before winning the MAAC Tournament MVP.  Starting guard Steve Samuels comes from Windsor High School and is currently St. Peter’s fifth leading scorer and second leading assist man while former Northwest Catholic guard Chris Prescott is sitting out this year per NCAA rules following his transfer from St. Joseph’s.

#2 Notre Dame – The Fighting Irish have a trio of New England products including two New England natives in Tim Abromaitis and Thomas Knight.  Abromaitis was named third team all Big East this year after averaging 15 points and 6 rebounds per game while shooting 42% from behind the three-point line.  Meanwhile Knight is being brought along slowly, seeing action in 13 games this season as a sophomore.  Joining Abromaitis in the starting line-up is former NMH post-grad Tyrone Nash who averaged 10 points and 6 rebounds and has had a double-double four times this year. (Pat Connaughton committed in 2011)

#15 Akron – Former Brewster Academy forward Chauncey Gilliam is currently sitting out per NCAA rules after spending two years at UMBC where he exceeded expectations by earning all-conference nods as a sophomore and being named America East freshman of the week four separate times during the 2008-2009 season.