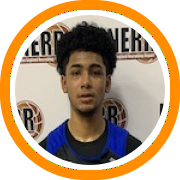 We are now in the final days before the release of our Elite 75 Frosh/Soph list and our virtual showcase has delivered another name to consider.

Central Catholic and New England Storm sophomore Marcus Rivera is a strong-bodied guard and two way player with an unusually mature approach for his age.

He already has an established reputation on local grassroots circuit from his success with the Storm and is bound to make a name for himself in the MIAA in the years to come.

If I can reflect on my game, I would say that I'm a strong 6'1" guard who can get a defensive rebound and push the ball up the court. I can run the offense and make everyone around me better. I'm always talking on defense and picking up my teammates. I set the momentum for my team and I can change the game.

"Marcus has been with the Storm program since the 2nd grade. It has been an absolute pleasure to see the growth and development in his game. He is what every coach looks for in leadership, dedication, and commitment to the game. Not a weekend goes by without the opposing coach complimenting his high basketball IQ, relentless play from start to finish, and being a constant vocal leader on the court. Marcus will be a great addition for college programs at the next level."
- Josh Peters, Director, New England Storm

"Marcus is a highly skilled wing player that rebounds very well out of the two or three position. He also is a very effective defender who, when asked, can guard positions two through four. One of his strong suits offensively is that he passes very well and has a high I.Q. for someone his age."
- Dave Brown, Coach, New England Storm

Rivera is an extremely mature player for his age, and in more ways than one. He is physically strong, able to assert himself on both ends of the floor, and at multiple spots on the floor. He's an excellent defender and rebounder who plays with a high-motor and great overall energy. What differentiates him though, is that he is equally smart. He's unselfish, willing to make plays for others, and also sees the floor well. He even has a good early skill-set with solid shooting mechanics and ball skills to keep developing.