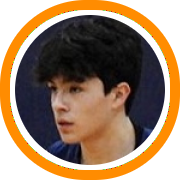 Diego Velez is originally from New York, but he's been making his presence felt in New England on the junior boarding school landscape since last year as an 8th grader when he put up big numbers for an Eaglebrook team that went 21-5.

Velez isn't just a basketball player though, although that is his first passion. He also plays quarterback for the football team in the fall and lacrosse in the spring.

Next year, he's looking forward to transitioning to another boarding school with the NEPSAC and the MAPL being his current focus because of the level of competition in those leagues.

"Diego is highly skilled in all facets of the game.  Excellent shooter, terrific defender, and has outstanding court sense.  He works hard in practice every day and is a leader both on and off the court. "
- Andrew Bedell, Head Coach, Eaglebrook School

Diego Velez is well-rounded in more ways than one. He's a multi-sport athlete and an outstanding student. On the hardwood, he's highly skilled. His handle, shooting ability, and even his lay-up making ability around the rim are all extremely advanced for a player his age. He has creativity with the ball in his hands and is capable of making plays for himself and others. The fact that everyone speaks so highly of his approach and character only adds to the intrigue of this young man.