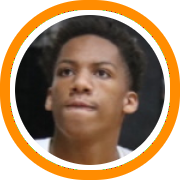 The 6-foot-5 wing from Boston is already a well-known young prospect and has the positional size, physical tools and foundation of skill to continue ascending in the coming years.

He's currently starring with the high school varsity team at St. Thomas More School and poised to be ready for the prep team sooner rather than later.

I want coaches to know about my off the court character.  I’m a hard worker and a positive kid.  I’m an all-around athlete.  I played soccer, swam, and played USTA tennis all at a competitive level.  I’m not just a basketball player.  So my basketball IQ is high because I use my knowledge of other sports to give me the edge, stay calm, and be a leader on the court.  My skillset and confidence is from playing other sports.  I’m a player that consistently improves.  I think this is the strongest part of my game because I’m very coachable and a fast learner.  I learned young how to dig deep to win.  I understand when to stay positive, be unselfish, stay focused, and how to work hard and have fun.  I try to get better every day and stay humble.  So I think coaches will enjoy developing me as a player and taking my game to the next level.

"He has great positional size and an ability to create his own shot when the ball is in his hands. He has a mature approach to developing his game everyday and a great basketball mind. He sees the floor very well and has an extremely bright future at Saint Thomas More."
- Taylor Mulvey, Varsity Coach, St. Thomas More School

"Abdur-Rahman De Leon is a SHOT MAKER! He makes winning plays and has a high basketball IQ. Every big game, Abdur show up and shoot that ball at a high clip! At 6-foot-5-and-a-half he can also defend and switch 1-5. His perimeter skills get better, it seems, every game I coach him. Abdur will take charges, sacrifice his body, and make winning traffic rebounds which I love. He has changed his body and become more bouncy every month it seems. What is crazy is that he hasn't even scratched the surface of where he can be!! He is a tireless worker and GREAT teammate. Abdur is giong nothing but up and I love coaching him."
- Joe Saunders, Coach, Expressions Elite

De Leon is mature beyond his years, both in his game and his overall approach. With good positional size on the wing, a well-rounded early game, and the habits to maximize those tools in the coming years, he's a youngster that you want to bet on long-term. His ability to shoot, pass, and handle the ball are all advanced for his age, especially at his size, while he is just beginning to grow into his body. He's a willing defender, good teammate, and has an impressive feel for the game at such an early stage.