Mitchell is a Minuteman 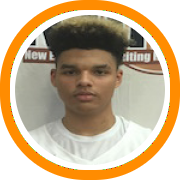 The best available prospect in New England came off the board on Friday night.

Woodstock Academy big man Tre Mitchell made a verbal commitment to UMass five days after wrapping up his official visit to their Amherst campus.

Count me in!!! Proud to announce my commitment to The University of Massachusetts❗️❕ pic.twitter.com/lMwNWUb3Cw

Mitchell arrived in New England in the fall of 2017 as a true junior who was highly skilled for his size but out of shape.

In the sixteen months since he has not only transformed his physique, losing over 30 pounds and beginning to sculpt his frame, but also proving himself to be one of the most skilled big men in the country.

After starring for Expressions Elite in the 2018 EYBL, Mitchell led Woodstock to a storied 2018-2019 season and picked up numerous high-major offers along the way.

In the Atlantic 10, he promises to be an immediate impact player and one of the conference's best freshmen.

At 6-foot-9, Mitchell has soft hands, the ability to score over both shoulders in the post, shooting range to stretch the floor, and a high-level passing instinct as well.

He joins Preston Santos and T.J. Weeks to become the third Woodstock Academy product to commit to UMass in the class of 2019 and the school's 10th overall division I pledge thus far.

Below is the All Ball video profile from earlier this winter when Mitchell was still mulling a post-graduate season.