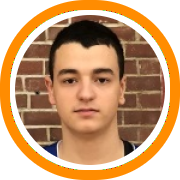 The state of Maine is up next as we continue to update our mid-season rankings and add first year prep products for the first time.

In Maine, prep programs have historically dominated the landscape with Bridgton Academy and Lee Academy continuing to provide quality prospects on an annual basis and new programs like Gould Academy and Hyde School emerging in recent years to fill the gap left by former powerhouse MCI.

However, the class of 2019 is a strong one in the local ranks as well with nearly half of the top 20 prospects in the state currently playing in the state association.

There's a new number one in town as Boo Buie has officially taken over the top spot. The Northwestern pledge has improved as much as any guard in New England over the course of the last year and is now one of the most potent scorers in the entire region. Always known for his ability to attack the basket, Buie is now equally dangerous behind the arc and that ability to score at all three levels has allowed him to take over games and put his team on his back at times this season. His running mate in the paint, South Carolina signee Wildens Leveque, doesn't impact the game to the same extent right now but nonetheless still has a high ceiling given his equally impressive rate of improvement and the fact that he's really only in his third year of organized basketball.

Despite the addition of several new prospects to the prep ranks, Hyde School's Frankyn Batista is now a top five prospect in the state. An athletic and mobile forward from Rhode Island, Batista is another player with a significant upside still to discover but also one who continues to make strides with each passing month. He already owns a handful of division II offers and is a clear priority for top programs at that level.

The most prominent newcomers reside at the state's most established prep programs. Bridgton features Kelton Samore, a skilled big man from California who put up huge numbers to start the season and has division I offers to his name, as well as Kani Glover, a Massachusetts native who has made strides in his game and become more of a true guard in recent months.

Lee Academy features several talented international prospects including Yacime Toumi and Veljko Radakovic. Toumi is a jumbo wing with terrific size, length, and fluidity. Radakovic, who signed with Maine in November, is a heady four-man with versatile tools and a strong feel for the game. Buffalo native Brandon Smith, a shot-maker with long arms, is also a newcomer in the top ten.

Matthew Fleming and Ben Onek continue to be the top prospects in the state association. Fleming is an offensively gifted forward who is already committed to Army and will take his game to new levels once his body catches up with his skill set while Onek is an athletic and powerful forward who is physically dominant in the state association but continues to make strides with his ball skills.

*Editor's Note: mid-year prep arrivals have not yet been added to rankings