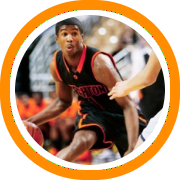 An overtime thriller was finally put to bed when Putnam sophomore Ty Nichols knocked down a pair of free-throw with 7.5 seconds left on the clock in the extra period.  Kayjuan Bynam scored 18 points for the victors while Ryan Boulter led Mansfield with 14.  The state championship is the first in school history for Putnam.

Malik James followed up a dynamic performance in the semifinals with a team high 16 points, including the 1000th of his career, as Brighton left little doublt about who the top team in division II was.  The win comes one year after Brighton fell in last year's state finals.