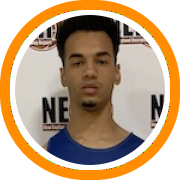 After previous stops in Vermont, Maine, and Connecticut, NERR’s Open Gym Series came to Massachusetts on Saturday night for the final stop in the inaugural series.

The event ended up attracting players from all six New England state associations though and so ended up being a very fitting culmination for a series that has uncovered previously under-the-radar prospects from throughout the region.

After beginning our recaps with the senior class yesterday, today we’ll shift our focus to the class of 2021.

Jake Bender, LaSalle (RI) - Bender was one of the break-out players in the field on Saturday. A big guard who initially stood out with his basketball I.Q. and willingness to play the right way, he snapped passes and moved without the ball. Later, he showed more individual offense, shot-making ability, and athletic upside including one big dunk in the open floor.

Sam Kodi, Manchester Central (NH) - A raw natural talent, Kodi showed high-level flashes and is still just scratching the surface of his potential. He’s a hyper-athlete with quick-twitch like instincts, lay-up touch, defensive potential, and even a decent foundation to his stroke.

Donte White Barboza, Boston Green Academy - A two-way player, Barboza proved himself to be a crafty scorer with solid burst off the bounce and a shooting stroke to match, but what really separated him with his powerful lower body and consequent ability to defend the length of the floor.

Jawarie Hamelin, Westerly (RI) - Hamelin was another young guard from Rhode Island who came and made an impression. He had a lot of game with the ball in his hands. He was shifty, tight with his handle, able to shoot off the dribble, and crafty inside the lane with a lot of tricks up his sleeve.

Abdulahi Aden, Boston Latin Academy: He hasn’t filled out yet, but those that slept on him at first glance ended up getting buckets dropped on them. Aden is a skilled scoring guard with deep range on his shot, good touch around the basket, and an equally impressive energy level.

Sammy Batista, St. Mary’s Lynn - Batiste showed off an advanced skill-set. He had the core skills as he handled it well and had a clean stroke, but beyond that he also understood spacing, had a lot of shake off the dribble, made extension lay-ups, and pocket passes in the pick n’roll.

Sam Prudovsky, Newton South - A true point guard who demonstrated a mature understanding of the game, Prudovsky was unselfish with his passing, stayed in constant motion away from the ball, and had the type of high IQ that is very unusual at this early stage.

Cody Appleton, St. Paul’s - He was one of the better shooters in the gym on Saturday night. Every rep looked good coming off his hand and by the time the session was done it was a surprise anytime he let one fly that didn’t end up finding the bottom of the net.

Mason Lawson, Boston Latin Academy: The other half of the Boston Latin backcourt, Lawson is a playmaking, drive-first style, guard. He plays with good pace north to south but also has some burst east to west and is as likely to kick-out to shooters as he is to create his own shot when getting into the lane.

Jack Anderson, St. Paul’s - He’s a tough kid with pretty good perimeter size and long arms to match. He also has good pace to his game with consequent playmaking instincts and potential.

Peter Kay, Pilgrim (RI) - He stood out as one of the smartest junior guards in the field. Kay made extra passes, quick decisions, understood spacing, and knew how to move without the ball in his hands.

Daniel Grasso, St. Joe’s Prep - He’s still evolving physically, but Grasso can really shoot the ball and has the potential to make that the type of niche that could translate to the next level.

Ryan Donohue, Boston Latin - A bonafide scoring threat inside the MIAA and Boston Latin's primary playmaker, Donahue showed a solid skill set complete with a good shooting stroke and physical upside to grow into with good length to his frame.

Max Hall, Belmont Hill - The scrappy southpaw was versatile and productive on both ends of the floor. He was reliable with the ball in his hands, had good form on his shot, competed with a high-motor, and showed some tenacity on the defensive end.

Souleymane Diaby, MacDuffie - A long and athletic wing who showed flashes of high-level plays in the open floor, Diaby can change the game right now with his slashing and defending while also possessing a good deal of still untapped potential moving forward.

Seidina Doukoure, MacDuffie - The southpaw is a physically imposing wing who is both strong and athletic. He can overpower most of his peers, has a high-motor on both ends of the floor, and is making strides with a fairly soft ball on his jumper.

Jacob Gibbons, Exeter (NH) - He’s a southpaw, but one with a nearly ambidextrous game. Gibbons showed he was capable of stretching the floor with lefty jumpers, but also put the ball on the floor and made righty runners off the glass. He’s got solid size at 6-foot-4 and might not be done growing yet.

Jake Harrison, Boston Latin - He was strong and physical, yet still light on his feet and in constant motion. Harrison provided a lot of intangibles on both ends of the floor but also shot the ball well from behind the arc.

Ben Kelsey, Pomfret - He’s a physically strong 6-foot-4 forward who competes, has some sneaky athleticism, and does a good job rebounding the ball. His mechanics are a little unorthodox but he’s not incapable of making open shots either.

Kualim Johnson, Marianapolis - He has good size, athleticism, and a strong build but the type of young face to suggest he may have more physical tools left to discover. He can attack with pretty good burst, has tools to defend, and also made a few heady passes.

Elias Figueroa, MacDuffie - Long with a high-motor, Figueroa is a local product who played primarily inside before this year and is just beginning the process of extending his game to the perimeter. He’s a solid athlete who looks like he could be just scratching the surface of his potential.

Parker Mason, Rocky Hill (RI) - Another junior prospect from the Ocean State who showed definite tools for the next level, Mason impressed with his size at 6-foot-7, solid base, ability to play through contact, and developing inside-out potential with touch that extends to the arc.

Tuscan Onuoha, MacDuffie - A true big man, Onuoha is 6-foot-10 with a naturally strong frame. He’s new to the game but shows a willingness to learn along with a strong body, high-motor, and touch that can currently extend out to about 12-15 feet.

Badou Ba, Williston Northampton - Ba has a ton of physical tools with a powerful frame, good athleticism, and the ability to run the floor. His skills are raw and he’s just beginning to learn the game, but there’s no denying his long-term upside.

Duncan Bubar, Newton North: A strong 6-foot-5 forward who is diversifying his game and expanding his face-up attack, Bubar is still devastating inside. He was arguably the best screener in the field, which is far more important than most kids realize, able to play through contact, rebound, and finish.

Addison Phifer, Hopkins Academy - A 6-foot-4 forward who is starting to play his way onto the radar and has a solid combination of size and skill, Phifer was capable with his stroke to the arc (and had particularly noteworthy shot preparation).

Kevin Ariste, Everett – Ariste has played primarily in the paint to date and is just now getting his first chance to play facing the basket. He’s getting more comfortable with the ball in his hands and has an athletic upside to discover.