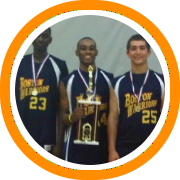 Massachusetts AAU held their “Final Four” this weekend assembling the semi-finalists from previously played preliminary rounds in all age brackets except for u16.

Boston Warriors Elite took the u17 championship defeating the New England Ballas in the final and in the process becoming the first club other than BABC or Bay State Magic to win the u17 gold championship in the last ten years.

The Warriors real test came in the semis against a well disciplined MPC Elite squad.  The game was back and forth throughout the first half until Samir McDaniels took over in the second, scoring 10 straight points on his own and converting a handful of three-point plays.

With MPC running their trademark flex offense, the Warriors locked down defensively and got offensive production from all five of their starters, all of whom scored in double figures.

Marco Coppola was “tremendous” according to Papas as he played tough defensively, never turned the ball over while running the point, and did all of the little things to win.

Dan Giovacchini is another guy who brought a ton of intangibles to the floor as Papas said he was like a man among boys coming up with every loose ball and rebound.

After knocking off MPC, the Warriors faced the Ballas in the final and this one was far less contested as the Warriors went on a 40-12 run midway through the first half to bust the game open.

Ousmane Drame, who stood out in preliminary action with a 24 point 20 rebound performance against Pat Ackerman and the Middlesex Magic, was again dominant on the interior while Dan Brooks stood out on both ends of the floor as well.

In consolation action, MPC would defeat Metro Boston to capture the bronze medal.

BABC dispatched of the Visionary Basketball Club in the u15 finals on Friday night while Blackstone Valley Chaos knocked off MYCW in the consolation to earn the bronze.

BABC defeated MYCW 59-23 in the semifinals utilizing good team defense to jump out to an early lead and never looking back.  The finals saw VBC fight back from a huge deficit to make the game interesting in the final two minutes but ultimately BABC came away with their latest AAU Gold medal.

BABC advanced to the Final four after winning three games in preliminary action last weekend.  Their opening win was over the Boston Warriors 83-44 as Wayne Selden led the way with 20 points, 7 rebounds, and 4 assists.  Next up was a win over Blackstone Valley Chaos 79-59 with Kamari Robinson, Xavier Garcia, Makhai Mason, and Joey OConnell also scoring in double figures.  Finally they beat Bay State Magic 77-44 with Rene Castro leading five players in double figures with 14 points and 12 assists and Bobby Ahearn posting a double-double of 13 points and 14 rebounds.  Ahearn secured double digit rebounds in all three games while Aaron Calixte was credited for being the team’s defensive stopper on the perimeter.