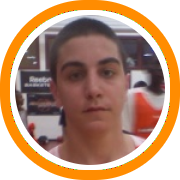 Dino Mallios is heading to St. Anselm’s College on a full scholarship.

Mallios committed to head coach Keith Dickson and the NE-10 program just after the first half of the live period, after having been followed by the Hawks coaching staff for the better part of the summer.

“They started looking at me because my uncle played with Coach Dickson at UNH and he told them about me,” Mallios said.

“I think the first game they saw was in the north finals against N.C.C.” he said.  “I scored 34 points or something like that but after the game they told me if they were going to recruit me hard I would need to be more of a point guard than a shooting guard.  So I’ve tried to concentrate on that during the AAU season.”

Mallios’ transition to the lead guard position has been smooth to say the least.  In fact, he stood out for his ability to run a team and distribute the ball this spring and summer.

Mallios has impressed with his Middlesex Magic AAU club as well as in camp and showcase settings.

“Not only is he a good player, but he’s a very tough kid,” said Middlesex Magic director Michael Crotty.  “We’ve had a lot of guards from our program go on to play in the NE-10 and I think Dino will do very well.”

To start the summer Mallios played at both Hoop Mountain Super Week Camps and was then selected to participate at the New England Elite 75 Showcase, where he proved he could hold his own against the most talented players the region has to offer.

St. Anselm’s was there at every stop of the way, monitoring Mallios’ progress.

“They called and offered me on the 16th [of July] I think.  I knew that was where I wanted to go and Coach Dickson was who I wanted to play for right away, but we went up the next day so my parents could see the school and meet the coaches,” he said.  “My parents liked it up there too so I committed that day.”