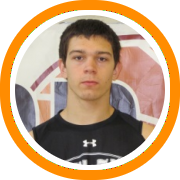 The class of 2011 may not have one big name like Keegan Hyland or Thomas Knight, but it has more depth than we’ve seen in some time in Maine and that promises to make the upcoming high school season all the more exciting.  While there are clear favorites in all four classes, there are also a variety of teams who have a legitimate chance to contend.

Cheverus – The Stags won it all last year and look like the overwhelming favorite to repeat in the west in 2010-2011.  Louis Distasio and Griffin Brady return to the starting line-up while sophomore Matt Cimino should be ready to assert himself as one of the premier frontcourt players in the league.  Additional depth comes from Cam Olson, Peter Gwilym, Connor O’Neil, and Malcolm Smith.

Edward Little – The back to back defending champions in the east, Edward Little is going for a three-peat.  They return Bo Leary, who is coming off an all-state campaign a year ago, as well as point guard Tim Mains.

Bangor – The odds on favorites to claim the title in the east, Bangor has a tough one-two combination in Tristan Thomas and Zach Blodgett, complimented by a host of complimenting players including Luke Hettermann, Patrick Stewart, and Josiah Hartley.

Thornton Academy – The Golden Trojans have perhaps the best one-two punch in the west in Andrew Shaw and James Ek and are consequently Cheverus’ biggest competition.  Shaw averaged 18 points and 6 rebounds a year ago and is coming off a breakout summer while Ek is capable of catching fire from long range at any point.

Hampden – They made a statement with a season opening win over Bangor and have one of the top guards in the state in senior Graham Stafford to go along with a quality backcourt mate in Christian McCue.  A deep frontcourt led by Fred Knight has also proven very important to start the year.

Deering – Three starters are back including John Amabile who averaged 15 points per game last year.  Also on board are senior guards Jackson Frey and Nick Colucci as well as three year starter Jamie Ross giving Deering a veteran laden and talented squad in the west.

• Bonny Eagle returns four starters including Steve Simonds and Cole Libby while they add one of the top freshmen in the state in Dustin Cole.

• Ray Bessette leads a Brewer squad that advanced to the eastern Maine final a year ago but must compensate for significant losses.

• Cam Sennick and Eric Berry lead the way for a Mt. Blue squad that is expected to be among the contenders in the east.

• Westbrook saw significant losses from graduation but returns Sean Murphy, a 6’5” forward who can catch fire behind the three-point line.

• Point guard Mitchell Black will be the catalyst for a Brunswick team that will be young but nonetheless dangerous.

• Nolan Allen could emerge as one of the top juniors in the state this year and that should be a big boost for a Windham team that is expected to be much improved.

• Biddeford returns all-state selection Chance Baldino who averaged 12 points per game last year while establishing himself as one of the top three-point shooters around.

Camden Hills – The Windjammers are the overwhelming favorites to come out of the east and take the class B title this year.  The 2008 champions almost made it two in a row last year and have retribution on their mind in 2010-2011.  Tyler McFarland is the state’s most dominant interior force who averaged 19 points and 9 rebounds per game as a junior while Keegan Pieri is a tremendous compliment on the perimeter.  The one-two punch is arguably the state’s best while Joel Gabriele will lead the supporting cast.

Greely – The Rangers could be the corresponding favorites in the west with a talented tandem of their own in 6’4” guard Sam Johnston and 6’6” big man Tanner Storey.  Johnston is the team’s star averaging 14 points per game this year and handling most of the ball-handling responsibilities from the point but the frontcourt has more depth as Storey is complimented by Caleb King, who many are predicting to have a breakout senior season.

Wells – Alex Furness returns and so Wells has a chance to make a run at the state championship game.  The 6’6” senior guard should be one of the state’s top players as a senior and rejoins a Wells squad that returns four starters from a year ago despite only winning two games.  Junior Paul McDonough averaged 12 points per game last year and headlines the list of returners that also includes 6’4” junior Josh Ingalls, and 6’3” sophomore Dylan Stevens.

Nokomis – When you have a star player and a great coach you are going to be dangerous and with Chris Braley and Carl Parker that’s exactly what Nokomis has.  They’ve obviously taken their lumps over the last two years but Braley put up huge numbers as a sophomore and the team learned valuable lessons in their first season under Parker.  They aren’t likely ready to come out of the east but that may be only a year away.

• Yarmouth is another team that will contend in the west returning three starters from a team that went 12-7 last year in Luke Pierce, Mike McCormack, and Josh Britten.

• Medomak Valley is expected to be among Camden Hill’s biggest threats in the east behind Isaac Durkee, who averaged 13 ppg last year.

• A western Maine finalist a year ago, Cape Elizabeth should have sustained success despite heavy graduation losses thanks to Cam Brown and Theo Bowe.

• Mount Desert Island has a go-to tandem that should help them challenge in the east with Jayson Burke and Ben Walls.

• Leading scorer Travis Dyer returns for Presque Isle and makes them a formidable opponent for anyone in the east.

• Cam Kaubris has put up big numbers early in the year for a Mountain Valley team that advanced to the western Maine semi-finals a year ago.

Penobscot Valley – They are the predicted favorite in the east with 6’7” senior big man Joe McCloskey giving them an interior scoring presence that isn’t likely to be duplicated in class C.  Fellow senior Jacob Jones is expected to shoulder most of the scoring burden on the perimeter, forming the necessary one-two punch that most championship caliber teams feature.

Boothbay Regional – The Sea Hawks return four starters from a team that went 11-8 last season including two double figure scorers in senior guard Dan Dickinson and sophomore guard Anthony DiMauro.  The frontcourt will be the key where senior Jake Simmons is the team’s most proven commodity.

• Old Orchard Beach is hoping size and talent outweigh experience as all five starters are gone from last year’s 17-3 team that went to the semi-finals in the west.

• Calais is always a force to be reckoned with in the east and this year will be no different even despite the loss of Cam Shorey.

• It is a similar story at Washington Academy where they lack star power but have no intentions of defying their strong history.

Jonesport-Beals – Sophomore sensation Garet Beal is a man among boys in class D, despite only being two years into his high school career, and has plenty of valuable parts around him in 6’6” junior center Justin Alley and junior point guard Matthew Alley.

• The defending champions Schenck hope to repeat behind Brandon and Eric Theriault along with Zach McLaughlin.

• Central Aroostook returns their full starting line-up from a team that saw the eastern quarterfinals a year ago.

• Longtime college coach Len MacPhee takes over at Greater Portland Christian and should have them dangerous by year’s end.

• Senior guard Jay Archer averaged 23 points per game as a junior and promises to make Seacoast Christian much improved in the west.