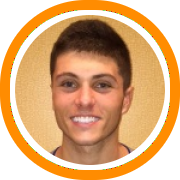 Welch is a five-foot-eleven guard who has played with the Magic since he was in the 7th grade and had a breakout July this past summer, helping to spark the team to a number of key victories.

"James is a remarkable shooter," program director and head coach Michael Crotty Jr said, "He gets tremendous elevation, has text book form, and his shot release is one of the quickest of anyone I have ever coached."

Welch isn't just a one trick pony though as he's also a strong defender and great "blend player" who is heady with a variety of intangibles.

"James' lateral speed and instincts allow him to be a great on ball defender," Crotty said. "He also possesses the intangibles of a winner in that he always does what is best for the team, and all of his teammates love playing with him and being around him."

Below are some of Welch's summer highlights.