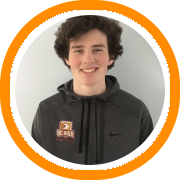 Before beginning his time at Phillips Exeter this fall, Loughnane had a storied career at Boston College High School. This past year, he averaged 27 points, 5 rebounds, 4 assists, and shot 40% from three-point range, leading the Eagles to an MIAA Division 1 State Title.

On the AAU Circuit, Loughnane has played a central role as a starter on a pair of Middlesex Magic 17u teams. Those teams won the 2021 Zero Gravity XL Championship, in addition to being undefeated so far in the 2022 Under Armour Association.

“I have had the privilege to coach him the last three years in high school,” said Middlesex Magic head coach Mike Crotty. He is very skilled with an immaculate work ethic. Last year Mike scored 20 when we needed him to but also facilitated at the right times. We have had two of our best 17u teams ever the last two years and Mike has been one of the constants from those squads."

“He is one of the most skilled players who has come through our program, in addition to being a terrific athlete and excellent person. When I learned he was going to do a post-grad year I felt a league like the A-10 was somewhere he could fit well, and Davidson is certainly a place where that could happen.”

Loughnane becomes the first member of Phillips Exeter Academy’s 2023 class to finalize their college plans. He joins Aidan Cammann as the second 2023 prospect on Middlesex Magic’s UAA Team who is now off the board.