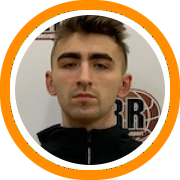 Vermont Academy and City Rocks Forward Jake Cook made a verbal commitment to Derek Kellogg and LIU-Brooklyn on Tuesday afternoon.

Cook and Vermont Academy announced the decision via twitter.

Cook has played his entire AAU career with the City Rocks and been a mainstay of their program for the last nine years.

"He has steadily improved over each of those years and is really putting it all together on the court and in all other facets of life," said program director Jim Hart. "At 6-foot-9, he has a unique combination of skill, size, athleticism, and basketball IQ.  Beyond his obvious loyalty, he is an incredible teammate.  He will have a great career at LIU and should be able to contribute immediately"

"Jake Cook prioritizes relationships, and I know he will be a great success because of this," mentioned Vermont Academy head coach Alex Popp.

Cook projects as a valuable piece in the NEC where there simply aren't many big men who have the athleticism to stretch the floor vertically and the budding skill, both with his passing acumen and improved shooting, to stretch it horizontally.

He becomes the first member of Vermont Academy's 2019 class to accept a full athletic scholarship and the fourth member of the City Rocks' class to do so.