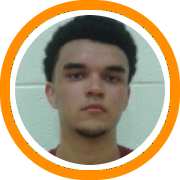 Bryant was one of the stars of New Hampton’s ferocious post-season charge to the finals of the NEPSAC AAA tournament as he helped them to wins over Bridgton Academy and St. Thomas More before battling Brewster Academy to the very last minute in the championship game.

The six-foot-five guard was especially impressive in the championship game, leading the Huskies in scoring and rattling off 16 points in the first half.

While that performance proved to be enough to attract a variety of new suitors, it was hardly a surprise to those who had watched New Hampton all season long.

Bryant arrived in New Hampshire following a successful career at Mill Hill High School in Georgia, where he initially committed to D1 Samford.  He not only re-opened his recruitment upon his arrival but also redefined his game, proving his ability to play the point at six-foot-five and emerging as the Huskies’ most dependable ball-handler and decision maker.

His size, versatility, and extremely high basketball I.Q. all helped to make him a high priority target for a number of division I schools in recent weeks, but ultimately he chose to play for head coach Matt Matheny at Elon.

The Phoenix recently completed their final season in the SOCON, after winning a divisional title in 2013, and will officially join the CAA next season.