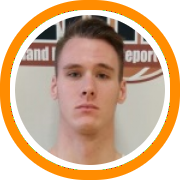 Cline is an Ohio native now in his second season at KUA where he is averaging 14 points and 7 rebounds per game while establishing himself as an especially effective frontcourt defender.

The 6-foot-7 forward joined KUA head coach Mike Olson on a U.S. Select squad that traveled to Germany last March for the prestigious Albert Schweitzer Tournament, where they finished three and three against top international competition.

Cline then spent the rest of the spring and summer starring with Metro Boston on the grassroots circuit, where he earned his first full scholarship offer.

"Spencer had a very productive season for us," Metro Boston director and head coach Mo Vasquez said. "It has carried over into his prep school season at KUA and schools continued to evaluate him. I'm very happy for him and his family because his hard work and commitment continues to pay off. He is a great young man."

Cline is a versatile two-way player with a college ready body and a high motor. He should be capable of playing both frontcourt position in the Northeast-10 as well as challenging for immediate minutes thanks to his work-ethic and consequent productivity.

He joins Duje Rada (Elon) to become the second KUA product to accept a full athletic scholarship in the class of 2017. He is also the third member of Metro Boston's class to finalize his college basketball plans, joining Mitchell Kirsch (Clarment McKenna) and Luke Rogers (Tufts).