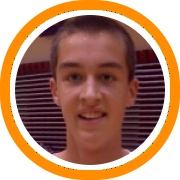 Andrew Kaufmann, a senior forward from the Rivers School in Massachusetts, made a verbal commitment to Swarthmore College on Sunday according to head coach Andrew Mirken.

The six-foot-seven forward has spent the last four years at the Rivers School, emerging as both a top academic prospect as well as a key component to their frontline.

“Coming to Rivers opened up opportunities to play in front of coaches, get better, and succeed in ways not many other schools can compare [to],” Kaufmann said.  “Swarthmore allows me to continue to get a great education and be a part of a young and coming basketball program.”

A small college of roughly 1500 students just outside of Philadelphia, Swarthmore is the third ranked liberal arts school in the country according to U.S. News & World Report.

Coming off just three wins during the 2011-2012 season, the program made consistent strides under first year head coach Landry Kosmalski last season, who previously played and coached at Davidson college.

In Kaufmann, Kosmalski is adding a skilled frontcourt prospect who specializes in being able to stretch opposing defenses to the three-point line.

Both commitments are pending acceptance of early decision applications.