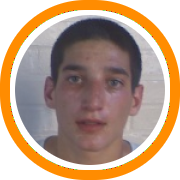 Trinity Gets a Good One

When Sean Tabb was the top assistant coach at Trinity College he earned a reputation as one of the top division III recruiters in the northeast.  Year in and year out Tabb’s efforts would result in Bantam recruiting classes that featured a variety of scholarship level talent.  And after taking over the reigns of the Bantam program, it is now apparent that nothing will change.  Mick Distasio is headed to Trinity next year where he will play both basketball and baseball.  Distasio was one of the three finalists for Maine’s Mr. Basketball award this season, honoring the state’s top player.  He also projects to be an excellent college player.  His most notable weapon is his ability to shoot the ball from long distances, but he has a number of other assets that should help him to make a quick impact at Trinity.  He has tremendous size for the backcourt, can handle the ball against pressure, and is an underrated passer of the basketball.  Distasio joins Kevin Polanco from Andover High School in Massachusetts as two players from New England to pass on scholarship interest in order to play for Tabb at Trinity.

M.I.T. head coach Larry Anderson continues to defy the odds and build a first rate program in Cambridge.  Despite facing arguably the most stringent admission requirements of any university in the country, Anderson has built the M.I.T. program to the point where it is consistently one of the best in the northeast.  This season the Engineers finished with a 21-9 record, advanced to the NCAA tournament, and even scored an upset win in the first round.  Now, Anderson has landed yet another recruit who has the potential to lead M.I.T. to further success.  Phillip Exeter’s Mitchell Kates will join the Engineers next year and has the type of talent to make an immediate impact on the NEWMAC.  Kates is a point-guard with a college ready body, a well developed skill set, and a high I.Q. both on and off the floor.  He had interest from both scholarship level and Ivy League schools but nonetheless opted to join Coach Anderson’s surging program at M.I.T.

Amherst College recently got word that Peter Kaasila will be joining the mix next year.  Year in and year out Amherst is among the nation’s best in division III basketball and Kaasila gives them another valuable presence in the frontcourt.  After claiming MVP honors at Eastern Invitational’s Academic Elite Camp last year, Kaasila’s recruitment picked up quite a bit and included a variety of division I programs.  But ultimately, the big man decided to join the Lord Jeffs in order to chase a national title.  Kaasila’s St. Mark’s teammate, Jay Freeman, is also heading division III as he will play at nearby Brandeis next year.  Freeman has all the talent to be a major contributor for the Judges.

Aaron Johnson has a long list of accolades during his career at Boston Trinity.  The senior point guard is the school’s all-time leading scorer with over 1300 points, a three time all-conference selection, and the team’s captain.  He’ll take his game to Eastern Nazarene next year where his leadership, college reading body, and ability to score the ball should all help him contend for immediate playing time.

Avon High School was one of the hottest teams in Connecticut for the better part of January and February as they rattled off 19 consecutive wins.  Senior guard Joe Ives sparked much of that success as he averaged over 18 points per game on the season.  Now he’s headed to Castleton State to continue his playing career for another four years.

Tufts recently earned a commitment from Matt Lanchantin of the Brooks School.  Lanchantin led Brooks in both scoring and rebounding during his senior season and helped them to a .500 record in the highly competitive ISL.  He’s predominantly a back to the basket post player who should be able to compete for minutes at the NESCAC school.

Point Guard Will Play at Clarkson

Lexington Christian point guard Matt Gibson will play at Clarkson for the next four years.  Gibson is a playmaking point guard who has a special ability to see the floor and pass the ball.  He’s a player who will no doubt have a successful college career as he has shown a dedication towards improving his game and body over the past three years.

Earlier this year Catholic University, from Washington D.C., came north to land the service of Lyman Hall’s Zach Russo.  Now they’ve added two more local talents to their recruiting class in LaSalle Academy’s Pucci Angell and Glastonbury’s Cody Otto.  Catholic is one of the more storied division III programs in the country and with the addition of these three New England products they should have their backcourt solidified for years to come.  Russo is a combo-guard who is a pure winner with a terrific feel for the game; Angell one of the best individual talents in the state of Rhode Island; and Otto a versatile talent who put up huge numbers across the board during his senior season.

Otto wasn’t the only Glastonbury senior to recently make a college selection.  Sharp-shooting guard Jon Karas is headed to Clark in Worcester, while Jeff Pitkin will play his college ball at Western New England College just outside of Springfield.  Meanwhile, John Pinone who starred on both the hardwood and the gridiron at Glastonbury has accepted a scholarship offer from the football program at Bryant University.  These four seniors have been the backbone of the Glastonbury program for the last three years and helped to lead the team to a 16-8 record this year as all four averaged in double figure points per game.

There have been a few commitments to come out of the Granite State recently, but not all of them will be playing basketball.  Brendan Donnelly, who was such a consistent interior presence for Alvirne High School this year, will head to Southern Connecticut State University on a football scholarship.  Nashua South’s Dan Feehan is also headed south, as he will play baseball at the University of Connecticut.  Jason Cheverfils, who put up huge numbers over the last two years at Manchester Memorial, will continue his basketball career at Colby-Sawyear.