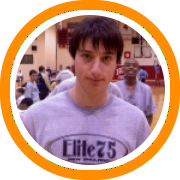 The Wizards were a team that no one wanted to see at last week's Hoop Mountain Junior Elite Camp.  Their strength came from their versatility as they featured a number of players on their roster capable of hurting the opposition.

Brendan Hughes, 6’0”, SF - Hughes is an extremely versatile player that can excel both in the post and on the perimeter. He has a good build and a nicely refined post game with a variety of moves, and shoots the ball out to three on the perimeter.

Jamal Lucas, 6’1” SG - Lucas is a long combo guard with good size. He’s a crafty ball handler who changes speed and direction to find his way into the paint, absorb contact, and finish. In transition, he’s great with the ball in his hands and is a very able passer.

Jake Sundean, 4’10”, PG - Jake is a small point guard who does a great job defending on the ball. He is a hard worker and an extremely coachable kid. His effectiveness as a point guard will drastically increase when he hits his growth spurt.

Hunter Lybeck, 5’7”, PG - Hunter is an aggressive defender at the point guard position. He is quick with the ball in transition, sees the court well and will find the open man.

Oliver Xu, 5’4”, PG - Oliver is an extremely skilled point guard. He handles the ball with both hands as though it’s on a string. He’s committed to getting better as he has yet to miss an extra help workout at the camp.

Kyle Baines, 5’7”, SG - Kyle is a great penetrator and attacks the rim hard. He finishes well through and over contact. In his Saturday evening matchup with Celtics he hit several midrange jumpers and attacked the rim and scored several times through contact.

Mickey Lyons, 5’9”, SG - Lyons is a lights out shooter with deep range. He can shoot the ball with his quick release off the catch, but is also capable of shooting the ball from deep off the bounce, especially with his step back move. Lyons will definitely be an impact shooter and player in his four years of high school.

Quinn Iuliano, 6’1”, SG - Quinn is a long combo guard with good size who is great going to the rim with both hands. He shoots well off the dribble and crashes the boards on both ends of the floor. His ball handling and change of pace is above average as well, making him a very versatile player with his skill set.

Max Butterbroit, 6’2”, PF - Max is a solid low post player with good moves around the rim with his back to the basket. He is also capable of facing up and shooting over defenders within 15 feet. For his camp team, Butterbroit has dominated the boards in most games.

Zach Goldman, 6’1”, PF - Goldman is a strong, athletic, versatile forward. He finishes well around the rim with both hands, gathering plenty of offensive rebounds and put backs throughout the duration of camp. Goldman possesses a solid skill set at the high post as well.