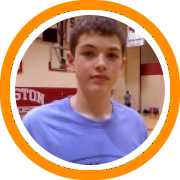 The Pistons had the make of a contender with a dynamic inside-out combination featuring the best big man in camp and a scoring guard on the perimeter.  That duo was surrounded by several other talented players making a deep and talented team.

Shane Farley, 6’0”, SG - Shane Farley is an off guard with a great set of offensive tools. He does not use many dribbles, but always makes a play with the ball in his hands. A heady player with a high basketball IQ, Farley truly makes his teammates around him better.

Andrew Cartwright, 6’6”, C - Cartwright was the biggest kid in the camp. He is just off a week playing with seniors and post grads here at super week two. He is a Maine product with a very high ceiling who blocks a lot of shots and finishes well around the rim.

Matt Sargent, 5’9, SF - Sargent is a kid with a great attitude who is very coachable. He has a nose for the ball and always seems to be diving after and retrieving loose balls. Offensively, he has a solid mid range game, and knocked down a couple face up jumpers in a Saturday morning battle with the knicks.

Ferran Brown, 5’10, SG - Brown is a slashing off guard who is extremely difficult to stop when he’s going to his right. He locks up his man on the ball and shows a willingness to run and play the transition

Frankie Chiodo, 6’0, PF - Frankie is a thick combo forward who does a great job defensively both on and off the ball. He is capable of defending multiple positions in games, and has a high basketball IQ, making him a favorite among the coaches.

Jimmy Casey, 6’2, SF - Casey is a long athletic wing who deflects a lot passes, picks up steals, and gets out in transition for easy buckets. He is a great kid who works hard and hustles for all the time he’s in the game.

Andrew Perron, 5’6, PG - Perron’s favorite move is a jump stop, and he uses it well to get into the late, collect himself, and finish strong and through contact. He is a solid shooter off the catch and moves well without the ball to set up his offense in positions he can make a play.

Andrew Jacob, 5’7, PG - Jacob is a lefty shooter who is clearly one of the most confident kids in camp. He pulls with range and is capable of knocking down shots. If he made better decisions and used wiser judgement in his shot selection, he would be an extremely effective player at this level.

Brian Onessimo, 6’0, SF - Brian is a great offensive rebounder at his position. He crashes the weak side hard and finishes with his great hands and soft touch around the basket. Defensively, he has an understanding of man to man principles and is a good help defender.

Nassar Buiser, 5’10, SG - Long athletic off guard who can shoot the three, Buiser projects to be a solid player in his upcoming high school career. He uses his wiry strength to beat his man and finish through the contact around the rim.