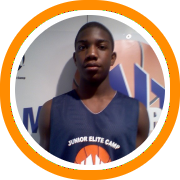 Before the championship games, players were selected from their respective division as the camp's Most Outstanding Player, Mr. Hustle, Mr.Station and Most Improved Player.  Today spectators in attendance were also entertained by two impressive showings in both divisions championship games.

MOP: Jared Terell 2013- The Weymouth swingman was clearly the most dominant player in the field this week. Terrell has the strength, quickness and dexterity to get to the rack when ever he pleases with his series of hesitations and crossovers. His crafty moves left defenders puzzles. If that wasn't enough, Terrell led his team to an undefeated record in regular season play.

Mr.Hustle: Jesse Maresca 2013- Whether it was on the boards or diving for a loose ball, Maresca seemed to get every to every ball. He quickly became a coaches favorite because he was always striving to get better at drill stations and extra help sessions.

Mr. Station: Ryan Dean 2013-Another workhourse who skills improved throughout the week. The speedy guard never took a moment off during morning and afternoon stations. His work ethic paid off with the end result of this award and his improved level of play by day 4.

MIP: Brad Kimball 2013: Kimball has a varsity ready body and all the tools needed to be a successful high school prospect. His work ethic was unmatched as he played an instrumental role in his teams championship victory

Bulls vs Pistons
In the game everyone at camp was waiting for, the undefeated Pistons squared off against the Bulls who were riding the momentum wave as well coming into the game. While the Pistons dominated all week, with the likes of camp MOP, Jared Terell, the Bulls earned their championship bid after coming back down 12 with 4 minutes left in the 4th quarter to win on a game winning 3 pointer from Jack Roberts.

In the first half of the Eastern Conference Championship, the Pistons picked up where they left off, starting with an 8-0 run led by Jared Terell, who scored not surprisingly on his variety of dribble drive moves. Terell, along with Kameron Nobles, formed a potent 1-2 punch as the tenacious guard was stroking it from the outside and getting into the paint at will.

Midway through the 1st, the Bulls challenged the likes of Terell and company with their own inside tandem of Milton Academy's rising freshman stars in Ike Ngwudo (pictured) and Brad Kimball, who began to dominate the glass. Ngwudo showed off tremendous athleticism and a sensational spin move that led to a leaning jumper in the lane to start the Bulls run. That posession was followed by two more stellar plays including an and-1 power lay-in by Kimball and a baseline jumper by Ngwudo. The Pistons went into the half with a 20-15 lead with the Bulls breathing down their neck.

In the 2nd half, the Bulls continued their comeback and grabbed their first lead of the game with 5 minutes left in the 3rd. The Bulls continued to defend agressively and shoot at a high percentage, stretching their lead to 8 by the end of the 3rd.

The domination of Ike Ngwudo and Brad Kimball continued in the final period as both used their size and length to rebound, finish around the rim and block shots. Ngwudo challenged the leagues MOP as he pinned a Terell drive attempt off of the side of the glass. On the following inbound play, Ngwudo sent another shot attempt out of bounds. On the Bulls, next offensive posession, the physical Kimball added another and-1 lay-in to the stat sheet. But Terell would not be outdone as the following possesion he used an in and out move to get to the rim, score and get fouled. Right when the Pistons looked to make another 8-0 run down 8 in the 4th, Terell went down with a pulled muscle injury that would sideline him for the rest of the contest.

This was a huge blow to the Pistons but they fought hard to get back into the game but the dagger came when Bulls guard Evander Machuca made a spectacular dish to Ricky Sullivan, who came up with the late game heroics once again after converting two points plus the foul. At this point the hole was to deep to get out of for the undefeated Pistons as they were knocked off 42-32.

jamir henderson_1.jpg" height="100" style="float: left;">MOP: Jamir Henderson 2014- As said on day one, Henderson was the most dominant player we saw in the West and the coaching staff at Hoop Mountain seemed to agree. Jamir has good size for a guard and is already more physically mature then most of the competition in his age group. The scoring guard was sensational all week was blowing by the competition with his speedy motor and finishing at the tin every time he was in action. His lock down defense made it easy for him to create fastbreak opportunities and share the rock with his teammates. Henderson showed an improved jump shot and looks to be a fantastic point guard down the road if his game continues to develop.

Mr.Hustle: Devin Graham 2014-Graham was one of the most coachable youngsters at camp this week. Always looking to do the dirty work for his team, the speedy guard looked to get on every loose ball possible.

MIP: Chris Declemente 2016- Chris had an outstanding performance this week at camp. Always trying to get better at camp, Chris was always looking for extra help and one of the last to leave the gym. It was a pleasure to watch the young gun take his game to new heights by the end of camp.

Nuggets vs. Trailblazers
The Cinderella story Blazers took down Brian Mukasa and the Nuggets in an 8 point victory. The Blazers owned a 10 point lead with 10 minutes left and never looked back. Brian Mukasa played extremely well for the Nuggets with his lock down D and athletic play but it wasn't enough as the Blazers were very active on the boards resulting in the W.