Judson off the Board 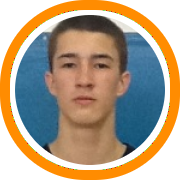 The six-foot-five swingman is a southpaw sniper best known for his ability to shoot the ball with range from behind the three-point line. He's also been a two year captain for St. John's Prep.

"I have coached Ben for 4 years now; two as an assistant and two as his head coach. Ben has improved his game every year," said high school coach John Dullea. "Ben is known as a knockdown shooter and has developed his game to be an all-around solid defender and rebounder while still being considered one the best pure shooters in the area. I expect Ben to have a very successful college career and lead his team to many wins."

"We are extremely excited to welcome Ben into our basketball family here at Johnson State College," Johnson said. "I can say with great confidence that Ben will make an immediate impact on our basketball program from day one, both on and off the court."

"Ben is a 6-5 shooting guard/small forward who can make shots consistently from long range at an extremely high rate," he continued. "But to label him a shooter alone would be making a huge mistake. He has a tremendous feel for the game and is equally adept at making plays for his teammates as well."