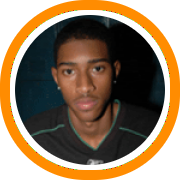 Jelani Floyd a 6’8” guard from Phillips Academy in Andover, Massachusetts committed to Brown University this weekend while visiting the school on an official visit.

“Coach Robinson has brought in a very athletic group of people that is unusual for the Ivy League. I think we’re going to be the best team in the Ivy.”

“Providence is a real up and coming city too” he added.

Floyd, who has been the catalyst of Phillips Academy’s 10-5 start this season is a perimeter player with great size, length, and athleticism who has a big upside. If he ever gets close to maximizing his potential he could be a major addition for a Brown team that appears committed to pushing the pace. In an up-tempo game his versatility is a major asset because of his ability to push the ball up the floor himself or fill a lane and finish above the rim. His size makes him equally versatile on the defensive end where he is quick enough to guard the perimeter and long enough to defend and block shots on the interior.

Before arriving at Phillips Academy for a post-graduate year, Floyd attended Whitney Young High School in Chicago, where another athletic swingman made a name for himself, Quentin Richardson.

This summer he played AAU with SYF Players one of the top teams in the nation. SYF advanced to the finals of the Nike Peach Jam before falling to Mean Streets Express which featured Eric Gordon and Derrick Rose, and won the AAU Super Showcase in Orlando.

“I think we were one of the top 3 teams in the country” said Floyd.

Joining Floyd at Brown will be one of his summer teammates in 6’11” center Even Schmidt from Chesterton Senior High School in Indiana. Fellow Midwest product 6’4 swingman Garrett Leffelman from Westchester High School in Illinois rounds out the Bears recruiting class to date.