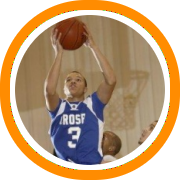 A year ago Ireland was barely on the division I radar, but after shining with the New England Playaz this summer, the point guard suddenly became a priority for schools from some of the best mid-major conferences around the country.

This weekend Ireland opted to end his recruitment as he made a commitment to Loyola Marymount while he and his mother were on their California campus for an official visit.

“I felt like a big weight was off my shoulders as soon as I committed,” Ireland told the New England Recruiting Report.  “I really just wanted to focus on my academics and our upcoming season.”

Loyola Marymount had been recruiting Ireland hard since seeing him late in the summer as the Playaz made their west coast swing, advancing to the finals of the Adidas Super 64 Tournament and then competing in the Double Pump End of the Summer Tournament held on the LMU campus.

“The main thing was the coaching staff.  I really got along well with them and my mom did too,” he said.

While Ireland said he never had any hesitation about going across the country to play his college basketball, his mother understandably had her reservations at first.

“When we got out there it was a no-brainer for her too,” he said.  “She felt real comfortable with everyone and just kept saying it felt like family.”

Loyola Marymount head coach Max Good has New England roots of his own after leading the Bryant College program from 2001 to 2008 and serving as the head coach of the MCI prep team from 1990 to 2000.

Ireland was eager to credit the New England Playaz, especially program director T.J. Gassnola and head coach John Carroll, for helping him to get exposure to college coaches all over the country while preparing him to play college basketball.

“First off I want to say what a pleasure it was to have him,” said Gassnola.  “First and foremost he’s a great kid and having him and Naadir [Tharpe] in the backcourt is why we had such a successful summer.  Loyola is getting a very good player.”

While Ireland was best known for his ability to score the basketball at Crosby High School, he’ll be depended on to run the team this year at the Winchendon School.  But more than anything else, Loyola is getting a player who knows how to win.  Before arriving at Winchendon and helping the Playaz to a 30-5 record this summer, Ireland led Crosby to consecutive CIAC state finals, including a state title in his junior season.