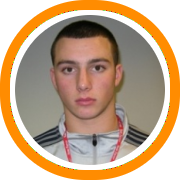 St. Mark’s freshman Jarred Reuter traveled to Indiana University this past weekend for the Hoosier’s Elite Camp and left with his first high-major scholarship offer.

Reuter arrived at St. Mark’s this fall as one of the most promising freshmen in New England but missed his first season in the NEPSAC with an injury.

The six-foot-eight big man only recently returned to the court, making his spring debut at the recent Memorial Day Invitational with his New England Playaz squad.

While working the rust off his game, Reuter got progressively better as the weekend went along, showing the tools that made him such a highly regarded prospect coming out of middle school.

A week later and Reuter was traveling to Indiana where he not only participated in elite camp but also had the opportunity to meet with head coach Tom Crean and the rest of the coaching staff.

Before leaving the Bloomington campus, Reuter scored the offer as Crean said he was impressed not just with physical tools and talent but also his work ethic and leadership skills.

This is the first of what promising to be a long line of high-major scholarship offers from Reuter as he follows in the footsteps of former St. Mark's big men like Erik Murphy, Nate Lubick, and Melsahn Basabe in addition to rising senior Kaleb Tarczewski.