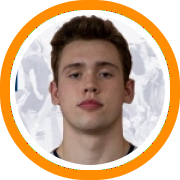 Hotchkiss junior Nick Townsend announced his commitment to Yale on Thursday, where he'll follow in the footsteps of his brother Matt Townsend, who played there from 2011 to 2015.

The younger Townsend is in his firth season at Hotchkiss after transferring in from Horace Greeley High School in New York, where he was named Mr. Basketball in section 1 of the New York State Public High School Athletic Association final.

Greeley advanced to the NYSPHSA final before the tournament was cancelled due to the pandemic.

Townsend will be the second Hotchkiss product to head to Yale in as many years as senior forward Jack Molloy is committed to the Bulldogs as well.

While Hotchkiss wasn't able to play publicly this year, Townsend is known as a rugged interior scorer and rebounder who is expanding his face-up game.

His commitment is pending admission in the fall of 2021.