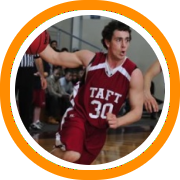 Competitive play continued on Friday at Hoop Mountain Super Week 1 as the playoffs approached. More and more college coaches filed through the Stonehill College gym to check out the collection of prospective college players.

C.J. Moss vs. Andre King- These talented prep school floor generals locked up in an afternoon game, both performing in solid fashion. Moss made multiple dribble pull-ups, getting King on his heels before rising up and firing. He also managed to get all the way to the hole by cradling the basketball through contact, before finishing or getting to the foul line. King countered by using his body to create space for his mid-range game. His size and power allowed him to get Moss on his hip and get to his spot. When all was said and done, the two guards appeared evenly matched, both presenting themselves very well to the college coaches on hand.

Shaq Sandiford vs. Carlin Haymon- The high school backcourt mates faced off in a night session game, and both of them showed just how devastating they are off the dribble. Shaq glides to the rim effortlessly and is supremely clever when it comes to going by defenders off the bounce. Meanwhile, Haymon makes a killing off of his pure speed and quickness, in addition to his exceptional handle. The two guards had trouble staying in front of each other despite knowing one another’s offensive repertoires so well. Perhaps, that should be a testament to both guards’ unique talent with the ball—after all, good offense generally beats good defense.

Connor Merrill, Vermont Academy- The lanky forward looked really good in his afternoon game, showcasing a soft lefty jump hook on the block. Merrill also passed the ball extremely well from the forward position, as well as blocking and altering shots with his deceptive bounce and athleticism.

Kevin Trotman, Taft School- Trotman was excellent for the second day in a row, playing very under control offensively, scoring off of two feet in the paint, and doing all the little things on both ends. Trotman showed the unique ability to take the ball off of the defensive backboard and singlehandedly start a fast break.

Oliver Nazon, Brimmer and May- This kid continues to impress at Super Week 1. His length at the wing spot is intriguing, and when you combine that with his skill set, Nazon is a very tough cover. While he’s not a guy who will jump out of the gym, the rising Brimmer and May senior is good with the ball and can really shoot it off the dribble.

OShawn Bannister, Weaver High School- A can’t miss athlete, Bannister has the tools to be an impact collegiate player down the road. At 6’8, he is incredibly long and disruptive defensively. His offensive game is still lagging behind, as he gains coordination and grows into his body, but his potential is undeniable.

Matt Kneece, Shrewsbury High School- 6’8 with a strong frame, Kneece is a load to handle in the paint. He physically overpowered people today, especially when he decided to make a hard drop step move and attack the rim.

Nicholas Light, Pilgrim High School- A small lead guard, Light is highly skilled and crafty with the ball in his hand. He got into the paint with his dribble and leaned in to finish plays with extension while also showing a step-back jump shot in the mid-range area.

Avi Adler-Cohen, Newton North High School- Adler-Cohen went to work in his afternoon game, getting to the basket the best we’ve ever seen him. Whether it was in transition or attacking closeouts, Adler-Cohen seemed to get right to the rim whenever he wanted. He is playing with great poise and confidence this week, and his on-court demeanor and attitude are remarkable.

Zach Zigelbaum, Beverly High School- The rising junior is a face up 4-man who can shoot the 3 ball and score in the post via the jump hook. While he hasn’t gotten many looks from deep this week, Zigelbaum has made a concerted effort to be a post presence for his team. When he gets the ball on the block, he is patient, assertive, and very skilled.

Deric McCottrell, St. Sebastian’s- Undoubtedly one of the top athletes in the gym, McCotterell has had an up-and-down week. When the game opens up, and he is able to play in transition, McCotterell has been sensational. However, when the game slows into a half-court affair, McCotterell has sometimes struggled to find his groove. The St. Seb’s star thrived in the morning session, dominating on the offensive glass and on the break.

Matt McGowan, Lake George, NY- The big lefty has had a very good week of camp. We really like his toughness and work ethic in the paint, as well as his ability to finish with strength around the rim. He does a great job of using his body to carve out post position, making himself available for post entries. At a sturdy 6-6, McGowan looks to be on his way to being the NESCAC’s version of David Lee.

Damien McClendon, Weaver High School- McClendon is an elite athlete at camp, who also has the ability to shoot the three. While he may have not been one of the more highly touted wing prospects coming into camp, he has proven himself amongst the best.

Dan Brooks, Kimball Union- Brooks is simply a superior athlete—he has a college-ready body and is highly explosive. When he doesn’t settle for too many jumpers and makes a concerted effort to get to the rim, he is very difficult to stop. His size and strength at the guard position allow him to play through contact extremely well and pretty much get wherever he wants to on the floor.

Sam Wilson, Taft School- Willsson shows the fundamentally sound game you would expect out of a coach’s son while adding a deft shooting touch. Some of Willsson’s best work however comes when the ball isn’t in his hands as he moved without the ball better than anyone else in camp. An ability to get open on the wing combined with range out to the three-point line is a dangerous combination for this 6-3 wing.

Kevin Bentivenga, Fairfield Ludlowe- Albeit undersized at 5-11, Bentigvenga more than makes up for it with one of the best strokes in the camp with great lift and tremendous follow through.

Lucas Van Nes, Northfield Mount Hermon- Unmovable at 6-7 and 240 lbs, Van Ness is a force to be reckoned with on the block. His offensive game has shown significant development since we saw him last as he fashioned a righty hook and a lefty hook on back-to-back possessions in Saturday’s afternoon slate. Van Ness, winner of the camp’s “Best Post Player” does an excellent job carving out space on the offensive glass.

Jarell Byrd, St. Thomas More- Arguably the most talented player in the camp, Byrd was surprisingly average on the camp’s first full day. Byrd broke out of his malaise Friday morning when he exploded in the first set of games with 2 high-flying dunks, a blocked shot and a 18-footer that hit nothing but the bottom of the net.