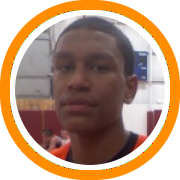 Hoop Mountain’s Super Week II Camp came to an end on Tuesday rounding out another strong week of action.  Ultimately there were a number of big winners this week but no one benefited more than Freddie Wilson and Kaleb Tarczewski.  Both guys established themselves as prospects for the highest levels as Wilson shined all week and was followed by Rutgers head coach Fred Hill for two different days while Tarczewski picked up his first scholarship offer from the Atlantic 10’s Fordham University on Monday afternoon, only to pick up his second a few hours later from Providence College of the Big East.

Once the game tipped off, Drummond once again seized the opportunity to display the all around skill and athleticism that he showed all week long.  He was featured in a match-up with another young big man who had developed a strong following in Tarczewski.

Kofane controlled the paint on both ends during his run, dunking multiple times and altering a fair amount of shots.  Pollard broke down the defense on more than one occasion, finishing in traffic and dropping off passes to bigs, including Majok Majok who put down a few strong dunks.

Matarazzo earned two accolades in this game – the smallest player to catch a dunk this week, as he threw one down in warm-ups, and the most amount of stitches, as the bloody blow to the head he suffered two minutes into the game needed ten stitches to close up.

Derek Retos hit a couple of deep threes, reminding everyone that his range is virtually unlimited while Carter-Williams hit a couple smooth 3s himself. Faithful put the finishing touches on his great week with a strong game, hitting multiple pull-up jumpers and finishing twice after blow by moves.

Watson scored in bunches from the inside and out while Murphy did his usual, combining tip-ins, jumpers, a couple of dunks, and pinpoint passes in a strong showing among the other top talent. Wilson impressed everyone off the bounce, scoring the ball at will, as he did all camp. Perrier, Langston and Evans displayed their skill and athleticism.

Most Outstanding – Andre Drummond – It was impossible not to notice his virtually limitless tools practically every time he came to the court.  It’s no secret that he’s far from a finished product and still has plenty to learn about the game, but with his size, length, agility, and athleticism he can go as far as he wants to in this game.

Mr. Defense – Majok Majok – Majok’s physical dominance of the paint was a factor all week long.  It wasn’t just his shot blocking as he patrolled the paint and prevented dribble penetration from ever consistently finishing, but he was also a physical presence guarding the ball on the block as he is more than a willing banger and a fantastic rebounder to finish the play.

Mr. Hustle – Brian Miller – Pound for pound he was the best rebounder in the camp.  He’s undersized for the interior but it doesn’t matter as he just overpowers or outworks opposing players and goes to get the ball wherever it comes off the rim.  He brings the same approach to other aspects of the game as well as you’ll never see him take a play off.

Mr. Stations – Scott Watson – This recognition is well deserved as no one worked harder to prove their worth than Watson.  Regardless of the situation this rising junior seized every opportunity to prove himself utilizing his quiet yet determined approach to the game.  His hard work is clearly paying off too as his game has grown by leaps and bounds in the last six months.

Sportsmanship – Eanna Rutherford – The international product is from Dublin and was a welcome addition to the camp as he did all the little things coaches look for and was a positive teammate all week long.

Playmaker – Phil Gaetano – No one throws it ahead in transition better than Gaetano and when you’ve got guys like Langston, Majok, and Drummond running the lanes for you there are plenty of opportunities to rack up assists.  That’s exactly what Gaetano did all week long as his passes were on the money and at just the right time.

Best Passer – Indiana Faithful – Faithful picks up this award because of the versatility in his passing game.  No one is better at feeding a hot hand than Faithful (just ask Keegan Hyland), but he’s just as good in the open court, off the dribble, or feeding the post.  There’s no better word to describe his game than crafty.

Post Player – Kaleb Tarczewski – Quite a week for the young big fella as he came in with no scholarship offers and leaves with one from the Big East.  While his production was tremendous this week, this is really just the beginning as he’s going to continue to get better for the foreseeable future.

Scorer – Freddie Wilson – He put it all together this weekend.  He’s so good with the ball that it’s too hard a task for a single defender to stay in front of him.  But when you double him he finds his teammates and if you play off him and dare him to shoot it he drains a three.

Gates stood out at various points this week as his shot making and high energy were easy to see.  He’s also got that swagger that all great shooters own as he’s always looking for that half an inch to get his shot off.  Gates reportedly picked up his first offer earlier this week as well from the University of Hartford.

Allen continued to be a defensive disruptor in full court situations and make his fair share of corner three-pointers.  He also showed a new dimension this week by bringing his defender to the low block and utilizing his length and cleverness to create his own shot with his back to the basket.

Burgo and Barnes are a nice 1-2 punch on the interior as Burgo offers a strong body and soft shooting touch while Barnes compliments with the bounce to block shots, rebound, and finish around the rim.  But look out for Brian Patterson, another long and athletic interior player who is set to transfer into the school to begin the upcoming school year.