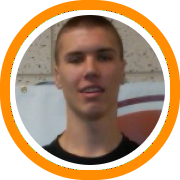 The seventeen and under bracket featured a number of intriguing local match-ups and Expressions Elite was right in the middle of most of them.  They began the day against Metro Boston and Shabazz Napier, who was looking to put the punctuation mark on a terrific weekend, in the round of 16.  After pulling off a hard-fought victory in that contest, they moved on to face the New England Playaz in what may have been the most anticipated game of the day.

Both teams came into the game playing at a very high level, despite the fact that they were a little short handed.  With Nate Lubick and Naadir Tharpe both out of the line-up the Playaz won Friday’s Basketbull First Eight Tournament after going 3-1 earlier in the week at the Adidas It Takes 5ive Classic.  Expressions was without Laurent Rivard, Tyler Olander, and Eric Ferguson on Friday, but still scored maybe their best win of the year over the Mass Rivals and got an added boost by getting Ferguson back in the line-up this weekend.

The game was a barnburner from the get-go as the teams traded baskets throughout the majority of the first half.  It wasn’t until the eight minute mark of the second half that either team established a double digit lead as Expressions went up by ten.  They gradually pushed that lead to the mid-teens over the next few minutes before the Playaz began to strike back.

With the lead cut to five, and the momentum clearly in the Playaz favor, Billy Baron took a quick three that initially looked to be just the shot the Playaz were hoping to force.  But when the ball dropped through the net it broke any momentum they had built and proved to be the backbreaker as the lead would never again come within five.

While Baron may have made the biggest shot of the day, the guy who made the most shots was Rod Odom, who was absolutely on fire from the perimeter for all 32 minutes.  Baron and Joe OShea combined to form a very tough backcourt, coming up with a series of gutsy and timely plays.  Eric Ferguson also chipped in with a number of athletic plays around the rim.

Anthony Ireland might not have been his absolute best, but he was still one of the best players on the floor, which just goes to show how far he’s taken his game recently.  Austin Carroll had a big first half, setting his team up for numerous easy buckets with his passing ability.

After Expressions scored the victory that set up another local match-up with the Connecticut Basketball Club in what turned out to be the final.  But this time it was CBC who would control the action as they built up a double digit lead that they held for most of the game.  Expressions made a late run but it wasn’t enough to turn the tide as CBC claimed a slim victory for their fifth title of the year.

Dominique Langston had his best day in quite a while for CBC as he stepped up after Chris Evans went down with an injury earlier in the day.  The most important thing Langston did was to let the game come to him, as he didn’t force the action and took what the defense gave him.  He shot the ball well from behind the three-point line and also made a couple of quick back-cuts resulting in alley-oop finishes allowing him to showcase his athleticism and body control.

The point guard duo of Luke Matarazzo and Phil Gaetano also came up huge for CBC in this game as they created a plethora of open shots for their teammates without turning the ball over.  Majok Majok was often the beneficiary of those passes on the interior as he finished everything around the rim while Steven Glowiak continued to bomb away with great accuracy from the perimeter.

After falling in the u17 final the Expressions program was hoping to get a championship out of their 16u team…and they didn’t disappoint.  It’s hard to understate just how impressive this team was today as they played some phenomenal team basketball.

While the final wasn’t a particularly pretty game, the low scoring affair was an appropriate conclusion to the day after the defensive effort that they’d put in since the morning.  That had a lot to do with the interior duo of Kaleb Tarczewski and Imoh Silas who were like the twin towers protecting the paint.  In the quarterfinals in particular, it seemed that if one guy didn’t block the shot, the other did.  In general, Silas had a breakout day today as coaches all noticed his physical prowess, rebounding, ability to run the floor, and finish with both hands.

But as far as college coaches go, no one had more attention than Alex Murphy, who was followed by Arizona and Georgetown for much of Saturday night and Sunday morning.  As one coach put it, “he’s just so far ahead of everyone else with his skills and understanding of the game.”

Coaches were also raving about Ricardo Ledo’s performance at last week’s Reebok All-American Camp and the athletic two-guard kept that momentum going today as he was disruptive defensively and showing his length and athleticism in the open floor.

Jules Tavares and Tyler Strange also stepped up at various points throughout the day as Tavares locked up defensively and made a couple of big time offensive plays while Strange was perhaps at his best in the final.

Evan Cummins made a nice contribution in the semi-final as he seized the opportunity to earn more minutes and showed he could be a consistent low post scoring threat.

Sunday was also a good day for the state of Maine as MBR’s 17u team won their pool and advanced to the semi-finals where they ran into the tremendously talented Florida Rams team and top ten big man Fab Melo.  MBR found themselves down by 20 at the half, but managed to cut the lead to 3 with just under two minutes to play.  Had they gotten maybe just one more three-pointer to drop in those final minutes they may have been able to pull off the upset, but regardless they still gave it a gutsy go and benefited from the attention their players received in the process.

Keegan Hyland knocked down five threes in the game (it’s crazy that we’ve come to expect that from him) and Jacob Moore continued his strong summer as he had four threes of his own and an estimated 20 points in the contest.  Dominic Borelli was said to be the standout from the night before as his interior toughness and rebounding helped MBR advance.

In the sixteen and under division MB Nation got a tough draw when they found themselves in the same pool with Grassroots Canada.  That loss put them in the silver bracket, but they wouldn’t fall again until the final where they met up with a hugely talented New York Elite team.

We were impressed with a number of MB Nation’s young players.  Tyler McFarland and Will DeFanti showed feel for the game beyond their years running their two man game from the top of the key, while guys like Alex Furness, Chris Braley, Andrew Shaw, and Keegan Pieri all looked to have very intriguing upside.  All four have good size, length, and perimeter skills as they all fall somewhere between 6’4” and 6’6” and can handle and shoot it.  Furness, Braley, and Shaw were all guys we had been impressed with before, but really jump out at us today.  Maybe that’s because we didn’t recognize him after transforming from a reported 6’2” point guard a year ago to the current 6’6” wing player we saw today.

When it was all said and done this was by far the best Hoop Hall National Invitational we’ve seen yet as the talent was top notch which resulted in quite a few college coaches spending the weekend in Springfield.