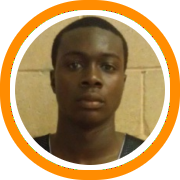 The Rhode Island Hawks cohesive 2014 back-court trio of Henry Bolton, Kealen Ives, and Jackson Donahue was particularly potent this past weekend in Providence as they led their squad on a championship run.  Bolton efficiently scored the rock from behind the arc and on the dribble-drive basket attack, while Donahue was deadly from deep and played his usual brand of mistake-free basketball.  Meanwhile, Ives weaved everything together for the Hawks; facilitating for his teammates, captaining the defense, knocking down treys, and attacking the basket on the sneak for easy bunnies.

Willem Brandwijk '14 - RI Hawks - 6'9 combo-forward from the Netherlands who had both coaches and media diving into their packets to match a name to a player.  Willem is a smooth athlete with big-time speed and hops.  Gets off the floor and elevates explosively and in a real hurry.  Nice-looking shooting stroke and a developing one-dribble drive game from the wing.  As his skills continue to develop and his understanding of the game matures, Willem has a ton of upside as a prospect.

Mike Hogervorst '14 - RI Hawks - Another young Dutch big-fella, Hogervorst is a skilled 6'9+ wide-body with soft hands and a nice feel for the game.  Uses his body to create space in the lane and then employs footwork and pump-fakes to score the ball in traffic.  Has the ability to face up and knock down the mid-range shot with his soft shooting touch.

Tyriek McCauley '14 - RI Hawks - Athletic combo-forward who uses his length and foot-speed to guard multiple positions on the defensive end of the floor.  Crashes the boards on both ends of the floor and gets out and aggressively and uses his speed to fill the lanes on the break, where he'll look to attack the rim with two hands off the one-foot bound.

Victor Udoji '14 - RI Hawks - Coming in with a reputation as defensive specialist out on the wing, the athletic south-paw wing Udoji showed off a much-improved offensive package; handling the rock efficiently, knocking down shots from the mid-range,and finishing at the basket in transition.

Kevin Degnan '14 - Team Frenji - Versatile long-armed 6'5 wing who plays high-IQ ball and scores the rock from all over the floor.  Possesses a sweet shooting-stroke; knocking them down indiscriminately from both the mid and long-range.  Attacks from the wing with the one-dribble drive and finishes with either hand at the rack or he'll attack the rim for a dunk-shot when it's there.  One of the most impressive 16u performers of the weekend.

Malcolm Smith '14 - Mass Rivals - Had a nice weekend wreaking havoc in the passing lanes and using his speed to get out and fill the lanes on the break. Finished consistently at the basket and earned frequent trips to the charity stripe.

Christian Morneweck '14 - Mass Rivals - High energy combo forward who gets himself into the mix all over the floor.  Rotates defensively to challenge shots in the lane and goes to the glass with a purpose on both ends.  Also showed the ability to face up from the mid-range and either knock one down or attack the basket with the dribble.

Matt Barr '13 - MB Nation - Scoring combo-guard got hot with his jumper this weekend and sparked a run to the Elite 8 for MB Nation.  Ability to make shots in bunches was easily recognizable but liked the way in which he was able to work his way into the paint and thrive both on and off the ball.

Matt Staubi '14 - Team Frenji - Diminutive floor-general with a right handle and a clever change-of-pace game off the bounce.  Gets into the lane and goes to work with a series of floaters and leaders.  Knock-down 3-point shooter, sees the floor well, and does a nice job of advancing the ball up the floor with the pass in transition.

Chima Azuonwu '14 - Team Frenji - Behemoth 6'8+ wide-body competes hard at both ends and plays with physical in the lane.  Comparatively new to the game and in the very beginning stages of his development, Chima, with his physical tools and hard-working attitude, should improve steadily as 2012 moves along.

Notes: Led by Liam Bruno, Jack Boucher, Sam Casey, Alex Hilger, and Phil Levine-Caleb, the Mass Bearcata used a balanced attack to go on a nice run in the 16u Gold Bracket; earning perhaps the upset victory of the weekend in the Sweet 16 when they knocked off a BC Eagles squad which took down the championship at the Basketbull HOF Championship the weekend prior.