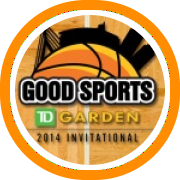 TD Garden has a proud history of supporting high school athletics. Through support from its philanthropic arm, Garden Neighborhood Charities, TD Garden has hosted the MIAA boys and girls high school hockey and basketball state finals or Eastern MA semifinals every year since the building opened in 1995.

The inspiration behind the Good Sports TD Garden Invitational is to create another opportunity for the TD Garden to be a valuable community partner. This tournament will provide young athletes with a truly unique experience, playing in a world-renowned, professional sports arena and create memories that will last a life time. These athletes will play under the same roof that houses more championship banners than any other arena in the country, and their fans will be treated to a professional-caliber game presentation, featuring music and instant replays on the Garden HDX scoreboard.

Tickets are on sale now and can be purchased for $12.00 in advance through the participating schools or for $15.00 at www.ticketmaster.com, by calling 800-745-3000, or at TD Garden Box Office. A portion of proceeds will benefit Good Sports Inc., an organization that helps to lay the foundation for healthy, active lifestyles by providing athletic equipment, footwear, and apparel to disadvantaged young people nationwide. To learn more about Good Sports, visit www.goodsports.org.

A schedule and preview of the games is listed below (Rankings are from Eastern Mass Teams):

North Shore teams will collide in the first game of the day with tip-off at 10:00am between Triton Regional (2-3) and Bishop Fenwick (3-6). This game will be a high intense match up as this has become a big rivalry of the past couple seasons.

One of the most anticipated matchups of the day by far is St. John’s Prep vs Wellesley. With an 11:30am tip-off, sparks will fly from both teams. First year Coach John Dullea has St John’s Prep (6-0) undefeated and really working well together. With a deep rotation that includes top players; Ben Judson, Kareem Davis and Max Burt this is a squad that has the ingredients to make a run deep in the playoffs. Wellesley (6-2) is led by one of the MIAA top scorers in Aiden James with a total of 110 points on the season. This should truly be a game to watch.

If you’re looking for an even well contested matchup between two teams with the exact same record, Malden vs Lynn Classical is the game to watch. Malden (4-3) is led by one the top scorers in the MIAA, Anthony Gilardi with a total of 134 points on the season. Lynn Classical (4-3) will be a team to watch with Kyle Doucette and Phillip Rogers being among the top scorers on the team. This game is scheduled for a 1:00pm tip-off.

At 2:30pm Acton Boxboro will take on Lexington this is a critical match up for both schools. Acton Boxboro is led by a three headed trio of upper classmen in Nnamdi Udokwu, Reid Larsen, and Michael Mundowa. Lexington (4-4) is led by 6’4 Sr Captain Hugh O’Neil who is a versatile wing that can score in the post and perimeter. The Minuteman are also counting on underclassmen David Barner and Harry O’Neil for scoring and an inside presence.

In a matchup of top twenty teams in the state, Brookline and Andover will be one of the most attended and exciting match ups of the day at 4:00pm. Brookline (6-2) is playing great basketball of late handing Newton North their first loss last week and is led by one of the most talented players in the MIAA in Elijah Rodgers. Andover (5-1) is also off to a fast start led by 6’6 Connor Merinder and sharpshooting Dave Giribaldi. Using their physical, pressure defense they can really take teams out of their offense.

In one of the biggest rivalries in the state, Mansfield and Franklin is one of the most intense games of the day at 5:30pm. After winning the State Championship last year, Mansfield (9-0) has been one of the most complete teams in the state again this year. Led by the lightning quick PG Rocky DeAndrade they have gone undefeated, justifying their top 3 preseason rank. Franklin (5-4) is one of the hardest working teams in all of the MIAA under Coach Dean O’Connor. Senior Guard Chris Rodgers has led the Panthers this year with his high basketball IQ and shooting ability. These teams met on Jan 10th with Mansfield taking the victory.

In a highly intense crosstown matchup, the grand finale of the Good Sports Invitational pits Newton North against Newton South. Newton North (6-1) is one of the biggest contenders for a state championship this season under Coach Paul Connolly. Guard Tommy Mobley is one of the most prolific scores in the state. With Mobley, Liam Bruno, and a talented roster many consider Newton North to be the best shooting team in state. Newton South (3-4) under Coach Joe Killea, will be looking to take down the cross town rival and add a spark to the second half of their season. They will look to their Captions Phil Levine-Caleb and Geoff Gray for leadership while Mark Karmiy is leading them in scoring with 15.5 pts a game.